It can be easy to forget that humans living on Earth today are the product of thousands of years of adaptation.

Without modern technology, our ancestors evolved some extraordinary traits to help them survive in their respective corners of the globe, and many of them live on in modern populations today. These are sometimes nicknamed 'stealth' traits, seeing as they don't usually have observable representation, but they can provide some impressive abilities.

The infographic published in Science back in 2015 shows in one handy map the ancient 'stealth' genes that have been found in modern populations: 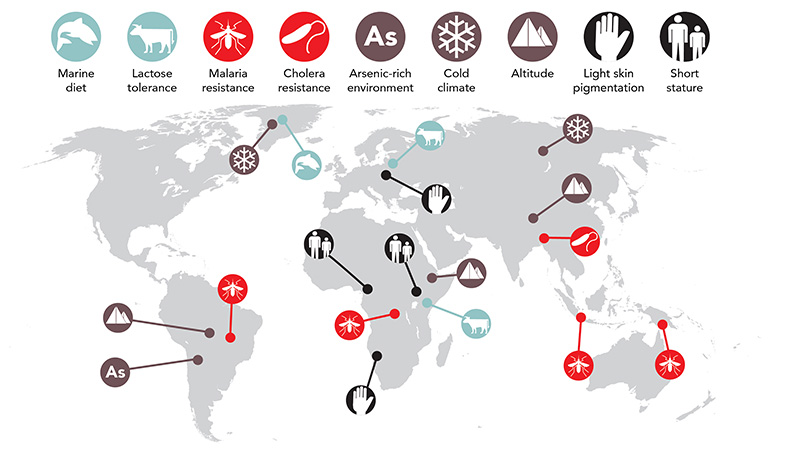 As you can see, there are groups of people in Africa, South America, and Asia today that are resistant to malaria, thanks to a random mutation in an ancestor.

This mutation would have made that individual more likely to survive and reproduce, passing the trait on until it became dominant in a population.

In the Andes in South America, as well as parts of Nepal and eastern Africa, there are also modern groups that are resistant to the effects of high altitudes.

And indigenous populations in the Argentinian regions of the Andes have inherited a genetic mutation that makes them able to drink arsenic-laden groundwater - the water in the area has been naturally contaminated with arsenic leaching out of the bedrock for thousands of years.

These are some incredible abilities, and you can read the full paper in Science to get a better understanding of them. And it's not just Homo sapiens that we've collected stealth traits from.

Thanks to recent research, we know that our ancestors bred not only with Neanderthals, but also a mysterious group of hominins known as the Denisovans.

Denisovans are thought to have lived alongside Homo sapiens and Neanderthals on the Eurasian landmass between 100,000 and 60,000 years ago.

Both Denisovans and Neanderthals are now extinct, but recent research suggests that their genes live on inside some groups on Earth today.

Some of those genes aren't exactly helpful - research last year showed that we have modern human papillomavirus (HPV), or genital warts, thanks to our interbreeding with Neanderthals.

Modern European populations that carry around 2.8 percent Neanderthal DNA also seem to be at more risk of health problems such as depression, heart attack, and a number of skin disorders.

But some stealth traits can also be beneficial. A new study has looked into how modern-day Inuits living in the icy conditions of the Arctic Circle are able to survive, despite spending at least half of the year in temperatures below freezing.

Biologists have wondered for decades if these populations have unique biological adaptations, and new research published in Molecular Biology and Evolution shows that Greenland Inuit populations contain gene variations that appear to help them better adapt to the cold by promoting heat-generating body fat.

Interestingly, these variants likely originated in the Denisovans.

"As modern humans spread around the world, they interbred with Denisovans and Neanderthals, who had already been living in these different environments for hundreds of thousands of years," lead researcher Rasmus Nielsen from the University of California, Berkeley, told the New York Times last year.

"This gene exchange may have helped some modern humans adapt to and conquer new environments."

Thanks to improvements in DNA technology, we're only just beginning to understand how ancient DNA benefitted our ancestors, and continue to affect us today.

In 2016, it was revealed that an as-yet unidentified ancestor species might have also contributed to our gene pool.

Researchers from the University of Texas discovered evidence of DNA in modern Melanesians that appears to belong to an unknown human ancestor, but we're yet to find evidence of it in the fossil record.

Only time will tell what benefits their genes might have provided us with.

If you want to see some other traces of evolution on your own body, check out the video below: