The most in-depth radio survey ever taken of the southern sky has helped astronomers find the remnants of dead massive stars nobody knew were there. It's also produced some gorgeous images in the process.

It's called GaLactic and Extragalactic All-sky MWA (GLEAM), an all-sky survey with the same resolution as the human eye - showing what the sky would look like if you could see it in radio wavelengths.

At radio wavelengths between 72 and 231 megahertz, the survey shows a whole passel o' things that are usually invisible.

"It's the power of this wide frequency range that makes it possible for us to disentangle different overlapping objects as we look toward the complexity of the Galactic Centre," said astrophysicist Natasha Hurley-Walker of the International Centre for Radio Astronomy Research (ICRAR) node at Curtin University, Australia.

"Essentially, different objects have different 'radio colours', so we can use them to work out what kind of physics is at play."

The orange streak in the middle of the image (above) is the galactic plane and galactic centre, glowing brightly due to synchrotron radiation - electrons being accelerated along spiralling magnetic field lines. The blue is where red light is being blocked, for example by the plasma around stars. You can explore an interactive website here for a closer look.

So, Hurley-Walker and her team conducted an investigation using the latest GLEAM data release to try and find these missing explosions. Younger and closer supernova remnants, or those in densely populated regions, are much easier to find - astronomers know of 295 of them - so the team looked farther away, and in regions that are relatively empty.

They found 27 previously unknown supernova remnants from massive stars, over eight times the mass of the Sun.

In one particularly empty region of sky, where supernova remnants are really faint, they even found a really young one.

"It's the remains of a star that died less than 9,000 years ago, meaning the explosion could have been visible to Indigenous people across Australia at that time," Hurley-Walker said.

We know that Indigenous Australians have a rich history of astronomy dating back 65,000 years, and their oral traditions often feature stars that vary in brightness. It's possible this supernova could be described in these traditions, although this is yet to be investigated. 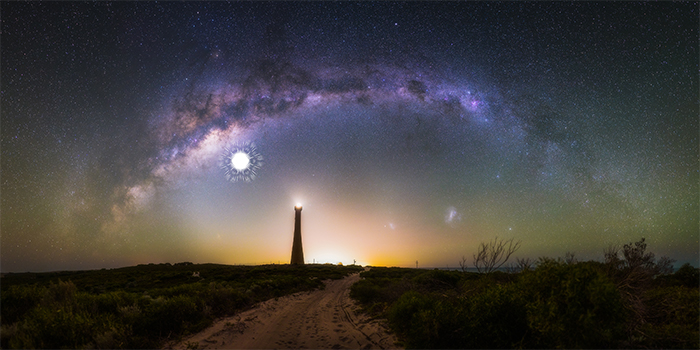 Where the supernova would have appeared 9,000 years ago. (Paean Ng/Astrordinary Imaging)

Two of the other remnants identified appear in regions of the sky that have no massive stars, which means it's possible these previously overlooked regions may be a source of hidden dead stars. Others still were particularly old - an exciting find, because supernovae in this age range are very difficult to spot.

The Murchison Widefield Array, the radio telescope in the Australian desert used to conduct the observations, is one of the few radio observatories in a "stable western country" that can observe in frequencies between 80 and 300 megahertz without significant interference.

It's also recently received a significant upgrade. This means, the researchers wrote in their paper, there could be even more supernova remnants that can be found using the GLEAM survey, just waiting to be discovered.

The research has been published in the Publications of the Astronomical Society of Australia.