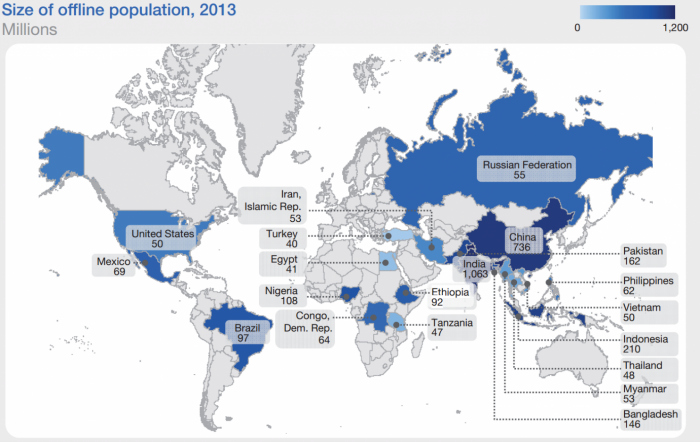 This map, created by consulting firm McKinsey & Company using data from the World Bank, shows where the roughly 4 billion people around the world who aren't connected to the Internet live. And it might surprise you.

While it often seems like the whole world is connected these days, the reality is that around 60 percent of the world still doesn't have access to the Internet.

Three quarters of the world's offline population live in just 20 countries - including India, Russia, Nigeria, Brazil and, surprisingly, the US, where one in five Americans don't have the Internet.

But things are changing quickly. Current uptake trends suggest that by 2017 nearly one billion more people will be online, with many of those in India. And both Facebook and Google now have innovative projects in the pipelines to help beam wi-fi to the whole world. Facebook intends to do this with giant solar drones, while Google wants to use balloons to beam its Internet.

With Internet access now being a key indicator of someone's economic prospects, both of these ambitious projects are important to help bring the majority of the world into the future and provide them with equal opportunities.

Even more excitingly, a US Internet provider just rolled out the fastest Internet in the world - capable of downloading a feature film in one second - in a US suburb. Hopefully this will help increase competition and speeds around the rest of the world too.

But in the meantime, it's fascinating to think about the billions of people out there who don't have access to information (and procrastination) at the click of a button.