NASA's Mariner 9 was the first spacecraft to orbit another planet when it reached Mars in late 1971. It got there only a few weeks before the Soviet Union's Mars 2 and Mars 3 spacecraft, despite being launched 11 days later than those missions. Unfortunately, there was a major dust storm when Mariner 9 arrived, and NASA had to wait until January before the spacecraft could get good images.

When it did get those images, they revealed a surprise: volcanoes and lava flows cover large portions of the Martian surface.

In the decades since Mariner 9's visit, we've learned a lot about Mars and its geologic history. For instance, we know that Mars is home to the Solar System's largest volcano: Olympus Mons.

But volcanoes and lava flows are just the most visible artifacts of Mars' ancient volcanic activity. As our technology has gotten better and better, we've been able to see the surface in greater detail. And that's revealed the presence of lava tubes on the planet.

Lava tubes form when lava flows underneath the surface. As the outside of the flowing lava cools and solidifies into a ceiling and walls, the interior stays molten and keeps flowing. Eventually, the lava flows out of the tube in a downslope direction, leaving the tube.

Lava tubes, also called pyroducts, can be found on Earth, the Moon, and Mars. They may be found on other bodies that have volcanic activity, too.

But while Earth is larger than Mars, terrestrial lava tubes are smaller than the largest ones on Mars. The HiRISE (High-Resolution Imaging Science Experiment) camera on NASA's Mars Reconnaissance Orbiter (MRO) recently took a picture of a collapsed lava tube ceiling that is much larger than anything on Earth.

When HiRISE took this image, shadows prevented it from seeing inside the collapsed section, sometimes called a skylight. But if the hole is 50 meters across, the lava tube is likely that large,too. On Earth, lava tubes are only as large as 14–15 meters (46–49 ft) wide, though they're typically much narrower.

Some scientists say that exploring lava tubes should be given some priority. Lava tubes could host any simple life that may have survived to this day on Mars. As the planet lost its atmosphere and cooled, the tubes could've provided shelter from the increasingly hostile surface conditions. If life had migrated there somehow, it may still be present.

Science journalist Sid Perkins thinks so. In his article "Core Concept: Lava tubes may be havens for ancient alien life and future human explorers," he said, "If Mars ever hosted life, it may have moved into such refugia as the planet evolved and surface conditions became increasingly harsh. Indeed, some researchers suggest that microbial life may yet hang on in the Red Planet's underground havens."

If those underground havens are good enough for Martian microbial life, they may be good enough for humans. Some researchers say that habitats or bases could be placed or built inside these tubes. In the same way that they could potentially provide shelter for extant Martian life, they could provide shelter for visiting humans on the Moon, or possibly even on Mars itself.

"Lava tubes could provide stable shields from cosmic and solar radiation and micrometeorite impacts which are often happening on the surfaces of planetary bodies," said Francesco Sauro, co-author of a comparative study of lava tubes on Earth, Mars, and the Moon. "Moreover, they have great potential for providing an environment in which temperatures do not vary from day- to night-time." 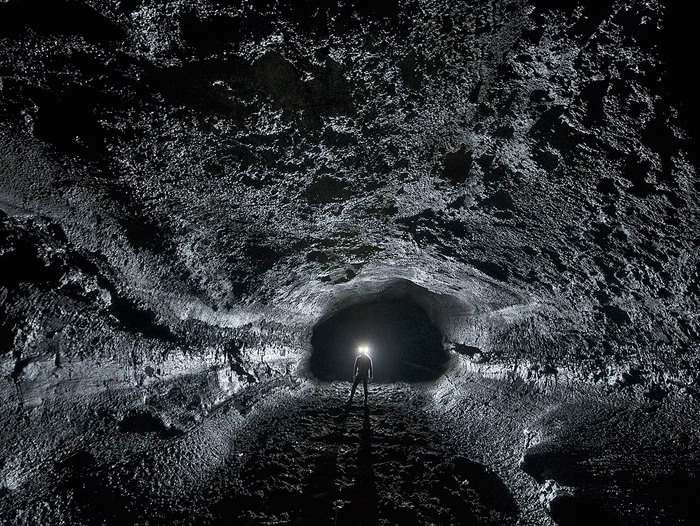 A person stands inside the the Surtshellir-Stefanshellir lava tube. (Dave Bunnell/Under Earth Images/Wikimedia Commons/CC BY 4.0)

But before we use them for that purpose, we have to explore them first. And though there's a strong likelihood that they're similar to tubes on Earth, nobody's really seen inside one yet. There are images that show a portion of the floor of these tubes, but that's it.

If we're going to explore them, it'll be risky. Astronauts on the Moon or on Mars are not going to be set up to go spelunking, or to belay each other down into the hole. There are probably some people who would dedicate their entire adult life to being the first to go into one, but space agencies are reluctant to put people in that kind of danger.

It'll probably be up to machines to do the initial exploration. And scientists have already put some thought into that. One concept is the Moon Diver.

The Moon Diver is the brainchild of NASA's Laura Kerber at JPL. She and her colleagues proposed the mission to explore the Tranquillitatis Pit on the Moon. The proposal included a stationary lander that would land near the pit. Then it would release a small, two-wheeled rover that would approach the pit, and lower itself into it while still tethered to the lander by cable.

Unfortunately, the Moon Diver was not chosen for funding. But the idea is still alive.

There are currently no plans to explore lava tubes on Mars or the Moon. But it might just be a matter of time until we do. Compared to some of the missions proposed to explore Titan and Europa, for example, a mission similar to the Moon Diver might not be that complex, or expensive.

But until then, they're tantalizing targets for cameras.