Known as the FFZERO1, the prototype also features a bunch of much stranger attributes, including a sleek, glass roof, an interior based on NASA’s anti-gravity research, and a helmet that can feed a constant supply of water and oxygen to the driver. The company announced at CES in Las Vegas this week that it could see "limited production" in the future.

Rather than being something the company really wants to sell, the car has been described as an "extreme testbed" for designing concepts to be used in upcoming commercial vehicles.

"The FFZERO1 Concept is an amplified version of the design and engineering philosophies informing FF’s forthcoming production vehicles," Richard Kim, head of design at Faraday Future, told the press. "This project liberated our designers and inspired new approaches for vehicle forms, proportions, and packaging that we can apply to our upcoming production models."

With room only for the driver, this "one-seater hypercar" has basically distilled the perfect driving experience down into something that looks like the Batmobile and runs like a Ferrari. The whole thing is fully Internet-connected, which means you can mount your smartphone onto the steering wheel and use it like a digital copilot, allowing you to access performance data and modify power output in real time. 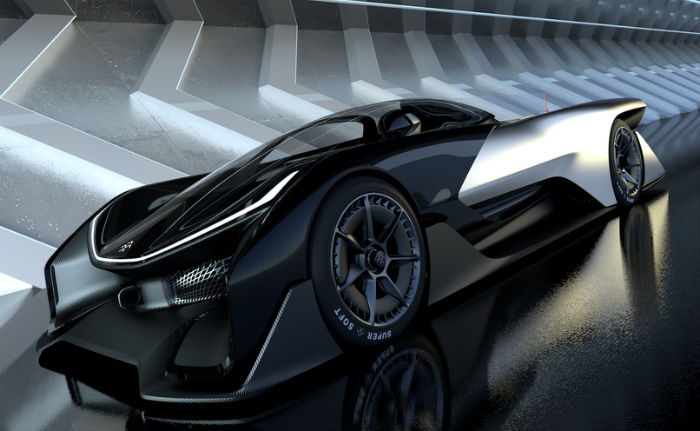 When it comes to the seating, Faraday says it was "inspired by NASA zero gravity design" to achieve reduced driver fatigue and "a sense of weightlessness" by maximising comfort and circulation. A gadget attached to the dash is there to monitor the driver’s biometrics just to be sure everything’s in check.

While that all sounds pretty ridiculous, the coolest part of the car is actually what powers it. Referred to as Variable Platform Architecture (VPA), Tamara Warren over at The Verge describes it as an "adaptable strings of batteries, in which rows of batteries can be removed or added". No word yet on how long a single charge would last, but the company says it's working with "the biggest and best battery cell suppliers in the world" to develop new iterations for future commercial vehicles.

While you’re likely never ever going to drive one of these things for real (unless you happen to be the Chinese billionaire who partly funded it), according to Extreme Tech, you'll soon be able to download an app that lets you configure the car in 3D, which is better than nothing, right?