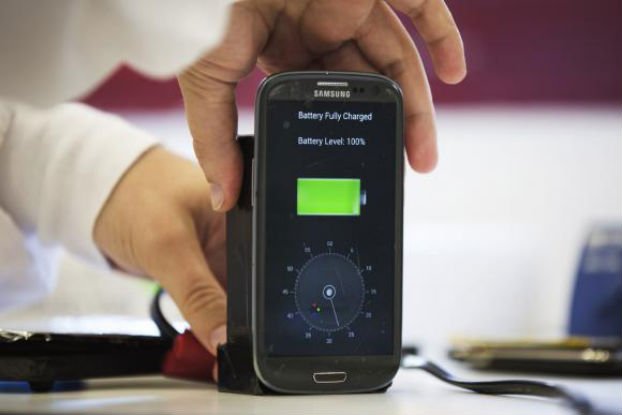 This New Battery Can Fully Charge Your Smartphone in 30 Seconds

A new battery developed by researchers at StoreDot, a technology company based in Tel Aviv, is able to store a super-high charge so fast, it can charge your smartphone in 30 seconds flat.

Demonstrated at the 2014 Microsoft Think Next Conference in Tel Aviv earlier this year, StoreDot's prototype battery fully charged a dead Samsung Galaxy S4 in just 26 seconds. "To charge that in 26 seconds would require 100mAh [milliampere-hour] of charge to be delivered every second,” says Steve McCaskill at TechWeek Europe. "Put more simply, that’s 360A [amps] of current, which sounds a lot, but is of course only delivered in the secondary circuit of the charger (transformer). so your household wiring will be safe."

Reuters compares the new battery to an incredibly dense sponge, able to soak up power and retain it more efficiently than ever before. While StoreDot's prototype device is far from ready - right now it’s too bulky and awkward to be a viable product - the team has predicted that it will be ready for commercialisation by late 2016. They expect a slim, smartphone-friendly iteration to be on the market by early 2017, and it will be able to pump your phone with a day’s worth of energy within seconds.

"These are new materials, they have never been developed before," founder and chief executive of StoreDot, Doron Myersdorf, told Reuters. He’s talking about special ‘nanodots’, which are artificial peptide molecules - about 2.1 nanometers in diameter - that the company synthesises and releases into the battery to rapidly increase its absorption and retention of power.

According to McCaskill, the nanodots were first discovered in Tel Aviv about 10 years ago as part of some unrelated research into Alzheimer’s disease. When it was suggested that they could be used for a number of applications, the researchers at StoreDot worked on incorporating them into memory chips.

The company is well-placed to make this happen. Not only are they backed by Russian billionaire and Chelsea soccer club owner, Roman Abramovich, but they’ve already raised $48 million in funding, including backing from an anonymous but leading mobile phone manufacturer.

Myersdorf told Reuters that phones integrated with the StoreDot technology would cost up to $150 more than the average smartphone does now, and would be able to handle around 1,500 recharge cycles for a three-year lifespan. They’re also hoping to expand the technology to electric cars in the not-so-distant future, so these car batteries could be charged in a couple of minutes, rather than overnight, as they are currently.

"They still have some way to go, to deal with size of battery and power cycle rounds [how many times the battery can be recharged], but if solvable, it's a very big breakthrough,” independent expert Zack Weisfeld said.

Watch it in action, we seriously can't wait: