Scientists have discovered a new kind of 'blue whirl' flame that could lead to cleaner ways of burning fuel, as well as helping in the clean-up of oil spills.

The refined flame is based on fire whirls, which naturally occur when rising heat and turbulent winds combine to create a thin tornado of flames. When creating fire whirls in the lab, researchers happened upon their blue whirl flame, which has never before been observed.

"A fire tornado has long been seen as this incredibly scary, destructive thing. But, like electricity, can you harness it for good? If we can understand it, then maybe we can control and use it," said fire protection engineer, Michael Gollner, from the University of Maryland.

Fire whirls are made up of a core flame surrounded by an invisible, rotating column of air. They can occur naturally in wildfires and urban fires, and could be the key to combatting oil spills, because of how efficiently they can burn up fuel.

Having created their own simulated oil spill in the lab, the researchers positioned a pair of quartz half-cylinders over the top to pull up cold air and create a fire whirl. Unexpectedly, that whirl then evolved into a quiet, pure blue flame.

The colour is important: the yellow in a flame comes from radiating soot particles, and shows there's not enough oxygen to burn all of the available fuel. Blue indicates that the fuel is being burned completely, and that means lower carbon emissions. 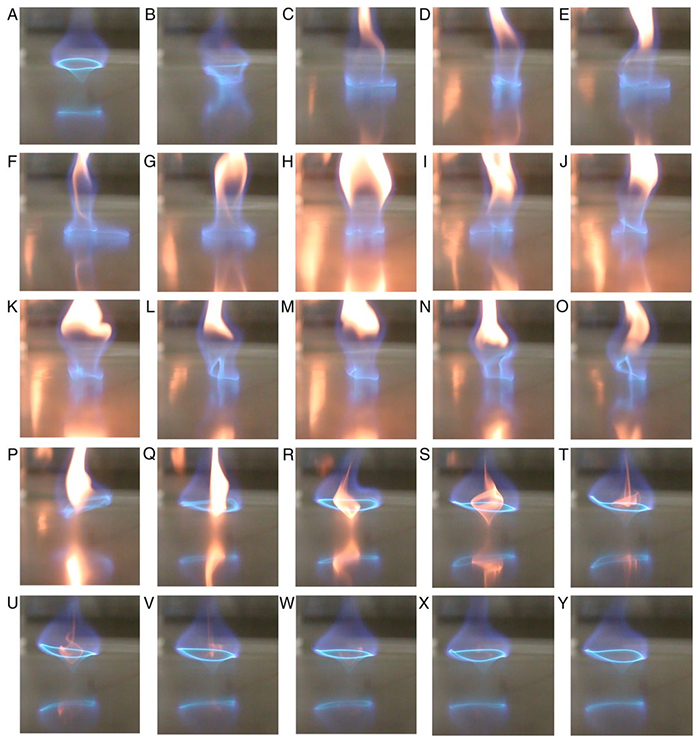 You can see in these video stills how the blue flame evolves from the yellow one. Credit: University of Maryland

By carefully pumping more fuel underneath the flame, the researchers could keep it going for a maximum of 8 minutes, though they say they can probably extend that.

The thinking is that the shifting gap between the flame and the surface of the water helps to burn up some of the fuel in advance.

But the researchers admit that there's still a lot they don't understand about the blue flame they've created, including exactly why it burns the way it does.

"A fire whirl is usually turbulent, but this blue whirl is very quiet and stable without visible or audible signs of turbulence," said one of the researchers, Huahua Xiao. "It's really a very exciting discovery that offers important possibilities both within and outside of the research lab."

Now that we know about the blue whirl, getting it outside the lab – and scaling it up – will be the next challenge for the scientists.

If replicating the flame outdoors is possible, the researchers hope one of the first applications could be cleaning up oil spills, as existing methods of burning oil on the surface of the ocean are smoky and inefficient.

In addition to oil spills – and expanding our understanding of fluid mechanics – there could be many more potential uses for this new kind of blue flame, but it's early days for the research right now.

"This is the first time fire whirls have been studied for their practical applications," said Gollner.

The findings have been published in Proceedings of the National Academy of Sciences.