This New Self-Healing, Stretchable Material Is Perfect For Wolverine

Inspired by the comic book character Wolverine, scientists have developed a self-healing, highly stretchable, transparent material that can be used to power artificial muscles.

The end product is a soft, rubber-like material that's easy to produce at low cost. It can stretch to 50 times its original length, and can heal itself from a scissor cut in the space of 24 hours at room temperature.

Just 5 minutes after being cut, the material can stretch to two times its original length again – not a bad power for a comic book superhero to have.

"Creating a material with all these properties has been a puzzle for years," says researcher and lifelong Wolverine fan, Chao Wang from UC Riverside.

"We did that and now are just beginning to explore the applications."

Wang says his love for Wolverine helped inspire his interest in self-healing materials, which mimic materials seen in nature, and can help extend the lifetime and lower the cost of man-made materials and devices. 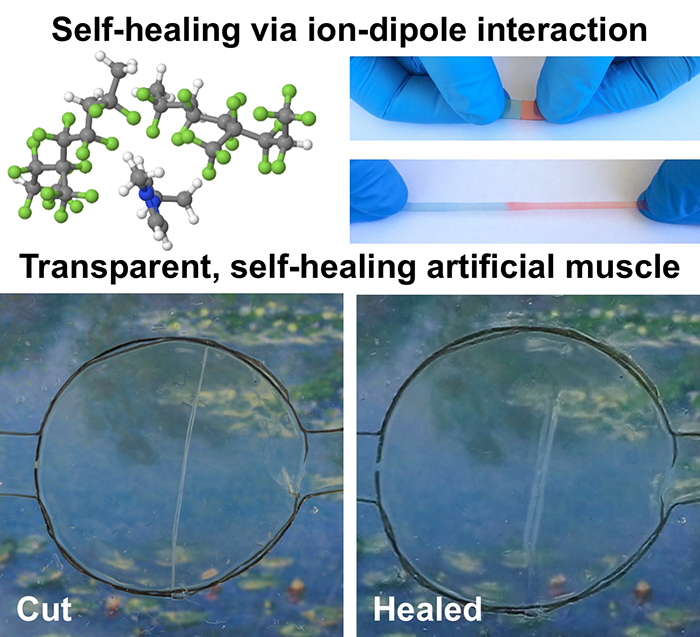 While transparent and stretchable ionic conductors have been developed before, adding self-healing properties has proved tricky – to get a material to self-heal, you usually need non-covalent bonds between the individual molecules, which can't share electrons.

Passing electricity through these bonds degrades them, which is a problem if you're trying to keep your self-healing material capable of self-healing.

To find a solution, Wang used ion-dipole interactions to hold the molecules together, which combine charged ions with polar molecules – where one end of the molecule has a positive charge and the other a negative.

The small electrical imbalance in both these types of molecule creates an electrostatic attraction between them.

So by mixing a high-ionic-strength salt to a stretchable polar polymer, Wang and his colleagues were able to produce a material with the properties they needed.

The researchers used two layers of the new material, with a transparent membrane in between, to create an artificial muscle prototype. It could move in response to electrical signals, in the same way a human muscle moves in response to a signal from the brain.

It's still early days for the material, but its unique combination of properties could make next-generation electronic devices and robots more resilient than ever, even if it's too late to get it fitted to Hugh Jackman's knuckles.

The research has been published in Advanced Materials.