This Physicist Has Built a Supercomputer From Old PlayStations

Next time you upgrade your gaming console for the latest model, there may be a better option than simply throwing the old one away - you can use it for science instead.

Guarav Khanna, a black hole physicist at the University of Massachusetts Dartmouth in the US, has managed to build a powerful and extremely cheap supercomputer using old PlayStation 3s (PS3s), and he's used it to publish several papers on black holes.

His research focusses on finding gravitational waves, which are curvatures in space-time that ripple out from a violent astrophysical event, such as two black holes colliding. They were first predicted by Einstein's theory of general relativity, but no one has been able to observe them.

To try to work out more about the mysterious waves, Khanna needed a supercomputer - a system that can crunch numbers at least 10 times better than a regular computer - to model what happens when black holes smash together, but unfortunately supercomputers are getting increasingly costly. So back in 2009, Khanna decided to make his own instead, as he told Laura Parker from the New York Times.

"Science has become expensive," Khanna told Parker. "There's simply not that much money going around, either at the university or the federal level. Supercomputing allows scientists to make up for the resources they don't have."

In theory, a supercomputer basically involves linking many standard computers together via a network. But instead of using regular laptops, Khanna decided to go a cheaper option, and link up PS3s. Their main benefit was that they allow users to install their preferred operating system on the console, and they retail for around US$250.

To help with his research, Sony donated four consoles to the experiment, and Khanna and the university bought another 12.

All 16 were then loaded up with Linux and linked over the Internet - the result was a processor that could speed up calculations by a factor of nearly 10 compared to an ordinary computer. He published the results of the make-shift supercomputer in the journal Parallel and Distributed Computing Systems in 2009.

He used that first device to model the behaviour of gravitational waves and publish several papers on the phenomenon, but since then he's now made an even more powerful model, as Parker reports.

In 2010, the US Air Force Research Laboratory in New York found out about Khanna's PS3 supercomputer, and decided to make their own out of 1,760 consoles, pictured below, in order to process radar image surveillance. 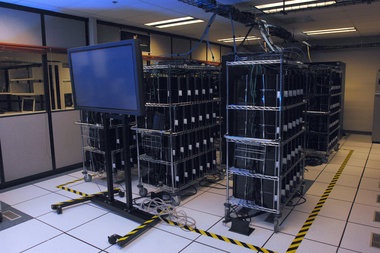 US Department of Defense

As a thank you, the US Department of Defense donated 176 additional PS3s to Khanna and his team. They now house their supercomputer in a refrigerated shipping container, designed to carry milk. This model is as powerful as 3,000 desktop computers, and only cost around US$75,000 to make - a ridiculously cheap amount for a supercomputer.

Although PS3s have their limitations - the memory is much smaller than traditional supercomputers, for example - their supercomputer is continuing to grow in power and has helped not only Khanna with his research, but other scientists around the university. The team will add another 220 PS3s to the system by 2015.

The next project Khanna wants to work on is creating a supercomputer out of PC graphics cards, which are equally low-cost but as powerful as around 20 PS3 consoles.

"The next supercomputer we're going to build will probably be made entirely of these cards," Khanna told Parker. "It won't work for everything, but it will certainly cover a large set of scientific and engineering applications, especially if we keep improving on it."