A rendering of Skylon taking off. Credit: Reaction Engines
NEWS

British aerospace firm Reaction Engines Limited is working on an engine system that will be able to take 300 passengers anywhere in the world in just four hours.

Even more impressively, the engine will also be used to fly a plane in outer space, as Business Insider reports.

The engine system is called SABRE, and it relies on a device called the precooler - technology that cools down the air entering the engineer system by more than 1,000 degrees Celsius in .01 seconds. That corresponds to an unheard-of cooling rate of 400 megawatts, and will allow the plane to “breathe” oxygen.

According to Reaction Engines, SABRE will be used inside two upcoming plane models - LAPCAT A2, a commercial plane that will be able to transport passengers from Brussels to Sydney in "two to four hours", and also the ambitious SKYLON, an unpiloted and re-usable spaceplane that aims to provide cheaper access to space.

As chief engineer Alan Bond explains in the video below, the LAPCAT A2 will be able to “pretty easily” fly around the world at an incredible Mach 5 - five times the speed of sound.

The precooler system weighs around a tonne, and, as Business Insider explains, is made up of a swirl of thin pipes that are filled with condensed helium. These pipes suck heat from the air, cooling it down to -150 degrees Celsius before it enters the engine.

The company is already testing the SABRE engine system, and is planning the first test flights for a tantalisingly close 2019.

SKYLON, the plane that will take us into outer space, will be 82 metres long and, although it’ll fly like a rocket in the air, it takes off and lands horizontally like a normal plane, which will make it more versatile. The model is estimated to cost around US$1.1 billion each.

Unfortunately, the plane won’t have any windows to look out of, but if new developments in aviation are anything to go by, that might not be such a bad thing - companies are now putting cameras on the outside of the planes and live streaming a 360 degree view on the inside walls or passengers.

Imagine being able to see this while flying through outer space. 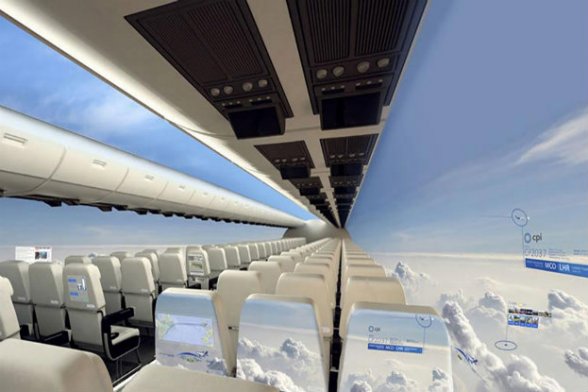 In this video from 2012, chief engineer Alan Bond explains more about how the new plane will work.