Ocean 'Dead Zones' Are Releasing One of The Worst Greenhouse Gases

In October 2019, I set sail with a team of scientists aboard the Canadian Coast Guard Vessel John P. Tully in the northeast Pacific Ocean, off the coast of Vancouver Island.

Battling rough seas and lack of sleep, we spent the better part of a week working shoulder-to-shoulder in a small stand-up refrigerator, analyzing seafloor sediments to learn more about the effects of low-oxygen conditions on deep-sea environments.

When organisms die, they sink through the water column, consuming oxygen in the sub-surface ocean as they decompose. This leads to bands of oxygen-depleted water called oxygen minimum zones, or "dead zones".

These harsh environments are uninhabitable for most organisms. Although they occur naturally in some areas, dead zones often appear after fertilizer and sewage wash downstream into coastal areas, sparking algal blooms, which then die off and decompose.

One of our studies from that expedition suggested that the sediments below oxygen-depleted waters are a significant source of nitrous oxide (N2O). This gas is released into the atmosphere when deep water rises to the surface in a process known as upwelling.

Global emissions of N2O are increasing as a result of human activities that stimulate its production.

Article in Science on declining oxygen in the global ocean and coastal waters, result of climate change and human activities. Oceans feed >500 million people and at least 500 dead zones have been reported near coasts, up from fewer than 50 in 1950 https://t.co/NBohXhtkaI pic.twitter.com/VLKA4PbHmO

The oceans currently account for around 25 per cent of global N2O emissions, and scientists are working to improve estimates of marine contributions.

Most research has focused on oxygen minimum zones, which are known as hotspots of N2O emissions.

Warming of the ocean due to climate change is driving the expansion of marine oxygen minimum zones globally. This has led to speculation that N2O emissions from the oceans will continue to increase and further accelerate climate change.

Our results indicate that even more N2O production may be expected where these low-oxygen waters are in contact with the seafloor.

Nitrogen is an essential component to life on Earth and exists in the environment in many different forms. Specialized groups of single-celled microbes use nitrogen-containing compounds, such as ammonium and nitrate, for energy to drive cellular functions.

These metabolic reactions mediate the transformation of nitrogen between its various states in the environment, during which N2O can leak out into the environment as a byproduct.

Aside from its effects as a greenhouse gas, N2O is also the predominant ozone-depleting substance emitted to the atmosphere. 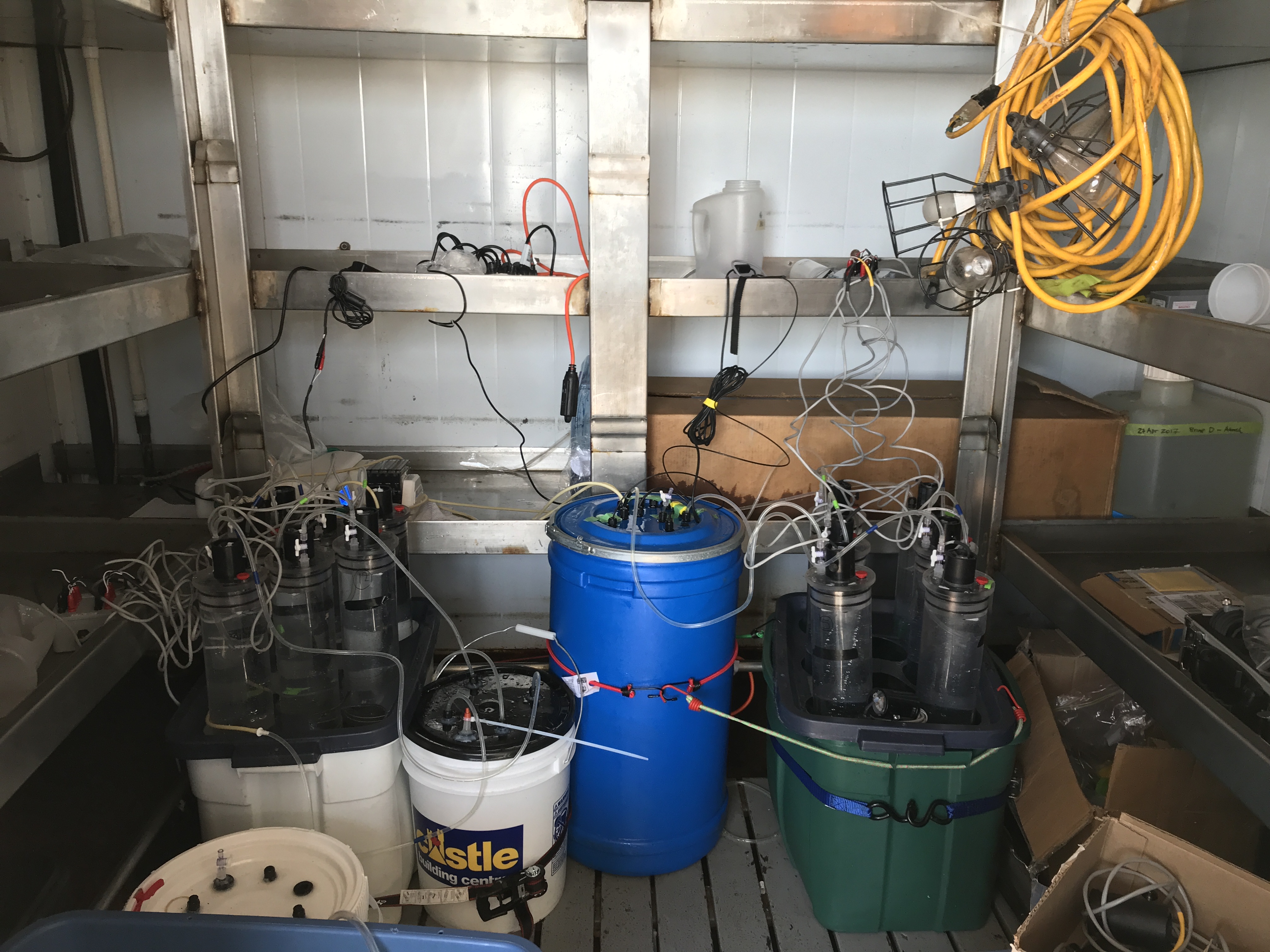 Sediment incubation experiments underway in cold room on board the Tully. (Brett Jameson)

Our team traveled to Bermuda in the fall of 2020 to measure N2O emissions in a pristine mangrove forest in collaboration with the Bermuda Institute of Ocean Sciences.

These sediments were shallower and accessible to snorkelers, which allowed us to thoroughly investigate their role in N2O cycling under different environmental conditions.

We found the seabed sediments in the Bermuda mangroves were actually consuming N2O from the overlying seawater. Similar N2O "sinks" have been described previously in other pristine systems, including estuaries, mangroves and even terrestrial soils.

When nutrient levels are sufficiently low, marine habitats can act as net consumers of N2O.

Sediments that act as N2O sinks can also act as net sources of N2O to the atmosphere when subjected to increased nitrogen loading from agricultural runoff and urban waste water.

Indeed, mangroves and other near-shore ecosystems that experience sustained inputs of dissolved nitrogen tend to be large N2O emitters.

The extent to which pristine environments can serve as buffers against increases in atmospheric N2O concentrations is still uncertain. Most studies to date have focused on densely populated and highly disturbed regions of Europe and Asia, which act as sources of N2O.

This leaves much to be learned about the role of pristine marine habitats as N2O sinks and their overall influence on global N2O budgets.

Although reducing future marine N2O emissions hinges on the more complex problem of slowing the growth and spread of marine oxygen minimum zones, actions to conserve and restore pristine coastal environments are tractable interventions that can be implemented in the short term.

At present, human agricultural practices account for over two-thirds of global N2O emissions. As a result, much attention has been directed at reducing the amount of excess nitrogen added to agricultural soils via fertilizer.

Since nutrients that are not taken up by plants often end up in watersheds that drain into the ocean, policies that address overuse of fertilizers will also benefit adjacent aquatic ecosystems.

The United Nations has declared 2021 as the start of a Decade of Ocean Science for Sustainable Development. Detailing the vital link between oceans and climate change has never been more timely than now.