We live in a world full of risks, many of which we cannot see for ourselves. But lucky for us, we do not walk this dangerous path alone. Within our bodies lie precious sentinel cells, fighting to keep us alive every day.

The job of the human immune system is gargantuan and extremely complex. Which is why, despite decades of research, scientists are still piecing together exactly how it works.

For the first time, scientists at the University of Queensland have gathered real-time footage of structures in the immune system called 'tent-pole ruffles', which we didn't know existed until now.

The incredible footage follows these newly-discovered structures on the surface of macrophage immune cells in exquisite detail, as they go about their daily work.

"It's really exciting to be able to see cell behaviour at unprecedented levels of resolution," says co-author Adam Wall, a researcher in molecular bioscience at UQ.

"This is discovery science at the cutting edge of microscopy and reveals how much we still have to learn about how cells function".

Tent-pole ruffles are located on the surface of some white blood cells, called macrophages, which detect and engulf cellular debris, microbes, cancer cells and foreign substances within the body.

The job of these ruffles is to assist the macrophages in gulping down and sampling the surrounding fluid for any potential threats.

The structures got their name because their projections look like tent poles with special membranes strung between them, called ruffle sheeth extensions.

This unique shape makes these immune cells ideal for gathering in large samples of fluid, a mechanism that scientists refer to as macropinocytosis. 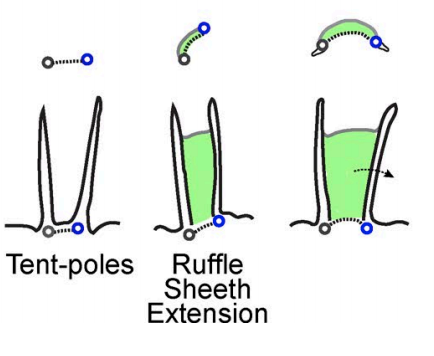 The discovery of these structures was only made possible by the invention of lattice light sheet microscopy which can capture, in just a matter of seconds, massive 3D images with extremely high precision.

Zooming in closer than ever before, the resulting footage goes a long way towards improving our understanding of the macropinocytosis process, an important mechanism not just for the immune system but also for cancer cells.

When aggressive cancer cells are present in the body, they use the process of macropinocytosis to gulp in nutrients from the body so that they can survive and flourish.

If scientists can figure out how to target these structures, theoretically, they could stop cancer cells from surviving.

"This imaging will give us phenomenal power to reveal how cell behaviour is affected in disease, to test the effects of drugs on cells, and to give us insights that will be important for devising new treatments," says study supervisor Jenny Stow, a deputy director of research in molecular bioscience at UQ.

The authors hope that with the new lattice light sheet microscope, they can further explore the intricate nature of the human immune system. We must say this first video is pretty damn impressive.

The study has been published in the Journal of Cell Biology.