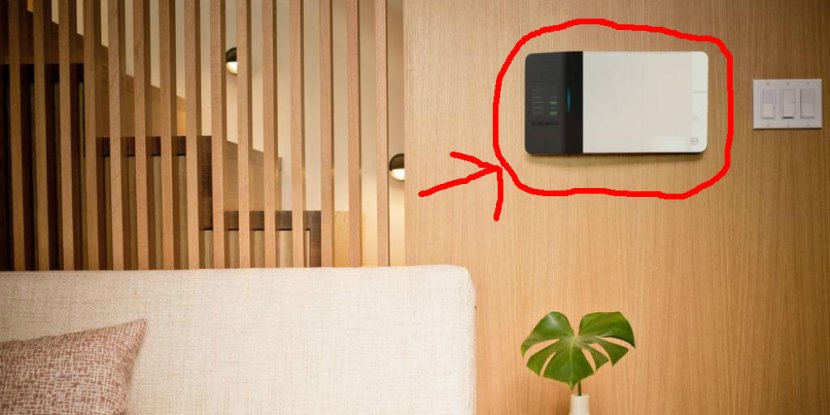 The innocuous box hanging on the wall in the image above may not look like much, but it’s apparently capable of wirelessly beaming power to up to 12 devices around your house at once. And it’s definitely more attractive than a mass of tangled cords.

There’s been a lot of talk about wireless charging over the past couple of years - charging pads already exist, but you have to place your phone or device on top of them in order to get juice. And last year MIT scientists invented a device that uses a magnetic field to power up your device from afar.

But a few weeks ago a new system was unveiled at the 2015 Consumer Electronics Show in Las Vegas - the same show that gave us these amazing wireless headphones - and it’s promising to change the way we charge forever.

Developed by electronics company Energous, the WattUp technology is essentially a wireless charging “router” that connects to your devices via Bluetooth and beams power at them over a 5.7 to 5.8 GHz range.

WattUp is able to deliver .25 Watts to 12 devices and an impressive 4 Watts to up to four devices when they’re within a 1.5-metre range. You can move as far as 4.5 metres away from the device, but it drops down to delivering just 1 Watt.

To put that into perspective, an iPhone charger delivers around 5 Watts. While WattUp may not be as powerful as a cord charger, the goal isn’t to charge your devices in the quickest way possible. The company instead hopes that by having the router in your house, your devices will never actually run low in the first place. Which is a good thing, because WattUp isn't breaking any speed records.

“Let it be noted that during the entirety of the demo I sat through, I did not once see a phone's battery level rise," wrote Jacob Kastrenakes for The Verge. "The phones did all display that they were being charged, however, so it appears that something was happening,”

But what’s so cool about the technology is that it actually intelligently chooses what to charge up and in which order, rather than just blasting energy randomly. For example, you can tell the WattUp software to always keep your iPhone charged to 100 percent when it’s within range, and not to charge your cordless mouse until it’s down to it’s last 5 percent.

And if you have different WattUp routers in different rooms of your house, your devices will simply be charged by whichever one is closest.

Of course, there are some setbacks. As Lee Mathews writes for Geek, WattUp is losing efficiency by beaming its power out into thin air - right now it’s around 70 percent efficient, but the company wants to push that up to close to 100 percent if possible.

The biggest issue, however, is that, while eventually the WattUp technology could be embedded into existing battery technology, for now, phones and other devices would need to have a WattUp-enabled battery pack.

Energous says that these will be on the market by the end of 2015 and apparently won’t be more expensive than any other battery packs, as Kastrenakes reports. The transmitter box itself will apparently cost around $300, which, given the price of individual chargers these days, isn’t actually too bad.

However, those prices could change - Energous doesn’t manufacture its own electronics, but manufacturing companies have already signed on to start making the technology. This means that they will be able to set the price. But it also means that they can integrate it into their own products and hopefully get it into production sooner rather than later. And to be honest, we can't wait.