Sally Ride's journey to become the first American woman in space, and the youngest person ever sent into orbit, began with a handwritten letter.

She wrote to NASA in 1977 after seeing an article in The Stanford Daily as she was finishing up her PhD in astrophysics at the university.

The article said that NASA contacted Stanford to help it "recruit women" as it looked to hire female astronauts to take part in its space shuttle program.

Ride wrote a short, handwritten letter in response, asking for an application form. It was just 40 words long.

"To whom it may concern,

I am a PhD candidate in astrophysics at Stanford University, and am interested in the space shuttle program. Please send me the forms necessary to apply as a 'mission specialist' candidate."

The letter even had a small typo crossed out.

This is a photo of the letter, shared with Business Insider by Ride's life partner, Tam O'Shaughnessy. 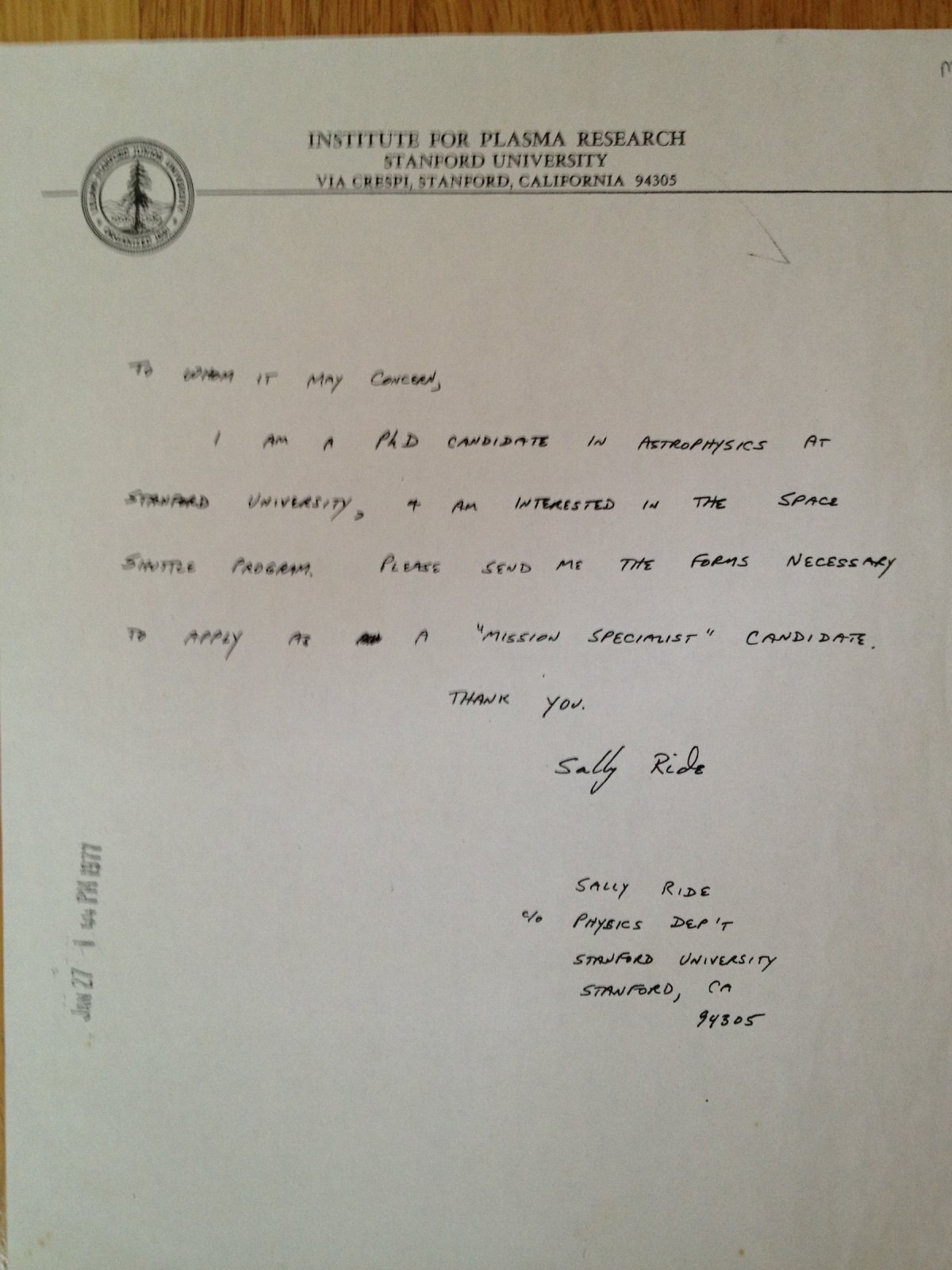 The letter set the wheels in motion for Ride to be accepted as one of NASA's first six female astronauts, and later the first American woman in space.

O'Shaughnessy told Business Insider that Ride had never thought about being an astronaut before she saw the article.

"She was eating breakfast in the cafeteria at Stanford, and she had one of those 'aha!' moments. It was like: 'Oh my God, I want to do that. I want to try to do that'. So she sent in a letter to NASA."

Ride first went to space on 18 June 1983 (36 years ago) as a mission specialist on the second mission for the Space Shuttle Challenger, and she went again 1984. She was due to return again but those plans were stopped when the Challenger was destroyed in an accident in 1986.

All seven crew members on a shuttle mission were killed when the Challenger broke up just over a minute into its flight on January 28, 1986.

Ride said in a 2002 interview shared by NASA that the selection process was "entertaining" at first.

"I remember that relatively quickly-and I don't know whether that was a week or a month-I got a simple one- or two-page application that was not much more than: 'Is there really somebody at the other end of this application? Do you really want to apply?'"

The process then become more serious, and she was eventually accepted as part of NASA's astronaut program.

She became an expert in NASA's robotic arm system, and was appointed into the commission investigating the Challenger disaster.

In 2013, then-US President Barack Obama described Ride, who died in 2012, as "more than an astronaut – she was an American treasure." Obama made the comments as he posthumously awarded her the presidential medal of freedom

Ride dedicated her life after her trips to space until her death in 2012 to improving science education, founding the nonprofit Sally Ride Science with O'Shaughnessy to work with school children, write books, and lobby for better science education.

She wanted to encourage a greater passion for science, particularly in girls.

"I think that many people still only think of her as an astronaut," O'Shaughnessy said.

"But they don't appreciate how much she did behind the scenes to affect space policy, science education policy."