As far as we know, liquid metal robots from the future have yet to show up. But new research into alloys and lattice materials shows how liquid metal shapes can be deformed and reformed using heat.

Researchers have developed a method of wrapping Field's alloy - a mixture of bismuth, indium and tin - in a lattice or shell made out of rubber-like elastomers, which gives the liquid metal some useful extra properties.

In particular, the liquid metal and elastomer lattice combination can be deformed after heating, and then recover its original shape after being heated up again a second time: not quite a robot rising up out of a lava pit, but the same sort of idea. "We spent over half a year developing this manufacturing process, because this new lattice material is very hard to process," says mechanical engineer Pu Zhang from Binghamton University. "You need to find the best materials and processing parameters.

"Without the shell, it won't work, because the liquid metal will flow away. The shell skeleton controls the overall shape and integrity, so the liquid metal itself can be confined in the channels."

Field's alloy has a relatively low melting point of 62 degrees Celsius (or 144 degrees Fahrenheit), and is used in a variety of ways – as a nuclear coolant, for example. Here, it can 'remember' its original shape with the help of the polymer shell.

This ability of the shell to recover its original form – taking the liquid metal along with it – could potentially be deployed in a number of fields, from robotics to space travel. 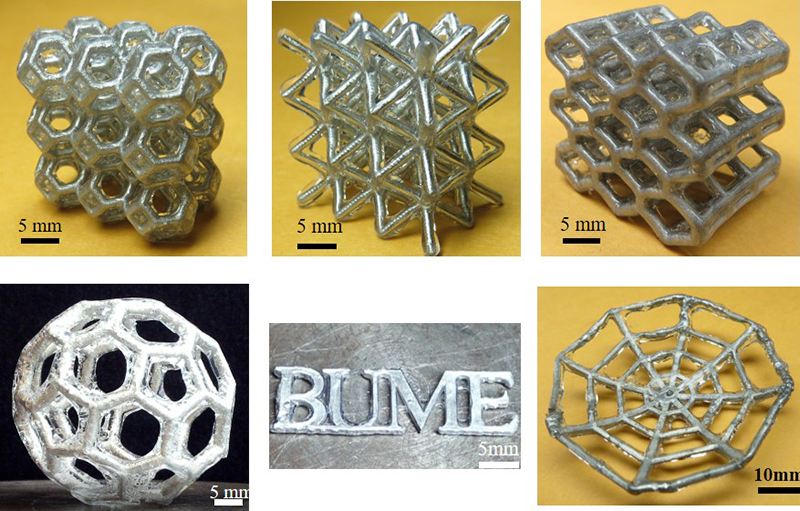 "A spacecraft may crash if it lands on the Moon or Mars with some kind of impact," says Zhang. "Normally, engineers use aluminium or steel to produce the cushion structures, but after you land on the Moon, the metal absorbs the energy and deforms. It's over – you can use it only once.

"Using this Field's alloy, you can crash into it like other metals, but then heat it up later to recover its shape. You can use it over and over again."

The team made several shape-regaining prototypes to test out the new structure, including letters, spheres, webs and honeycomb designs. The best of the bunch was a liquid metal hand though, which could be pushed down when heated and then spring back to its original state after being heated again.

Any situation where a strong and rigid object might need to be packed down or made more compact, and then opened out again, is a possible use case for what its makers say is the first liquid metal lattice in the world.

Work is continuing on the project to improve the structure and the coating materials used, and the ultimate goal of the researchers is to use their findings to create a liquid metal robot. That again prompts thoughts of the Terminator movies, and in particular the second in the series – just don't tell the team how the technology gets used.

"To be honest, I've never watched that movie!" says Zhang.

The research has been published in Additive Manufacturing.