Crater Lake in Oregon is the deepest lake in the United States, and its water is so blue, you'd be forgiven for thinking someone slipped a few gallons of food colouring into it.

But its sheer size and brilliant blue water aren't the only distinguishing features of Crater Lake - there's a 9-metre-tall (30-foot) tree stump that's been bobbing vertically in the lake since at least 1896, and it's buoyant enough to support the weight of an entire person standing on top.

First discovered in 1896 by geologist and explorer Joseph Diller, the so-called Old Man of the Lake has been floating upright ever since, standing about 1.2 metres (4 feet) tall above the surface.

And it's not just bobbing in the one place - back in 1902, Diller published the first scientific study on the stump, and found that within the first five years of its discovery, it had travelled some 400 metres (1,312 feet) through Crater Lake.

A second experiment run between 1 July and 30 September 1938 found that it had travelled way further that even that - thanks to high winds and waves, the unsinkable Old Man had covered at least 99.9 km (62.1 miles) in just three months.

"You would think that the 4-foot above the water would act as a little sail, but sometimes he'll move all the way across the lake against the wind," Mark Buktenica, an aquatic ecologist for the National Park in Southern Oregon told Conor Knighton at CBS News.

As the man in the image below demonstrates, the exposed end of the stump might be splintered and bleached by the sun, but it's buoyant and wide enough to support an entire person's weight. 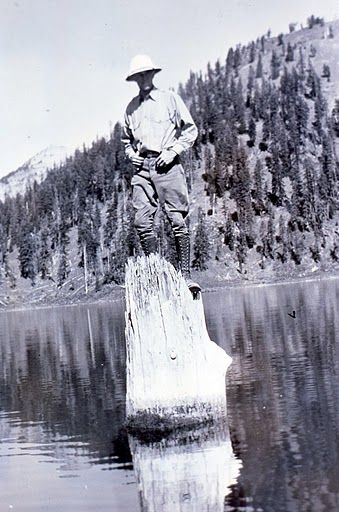 A ranger standing on the log, circa 1930. Credit: Wikimedia/Public domain

So where did this mysterious stump come from?

Thought to be a hemlock trunk, the Old Man of the Lake has been floating in Crater Lake in southern Oregon's Crater Lake National Park for at least the past 120 years, but carbon dating suggests that it is at least 450 years old.

Crater Lake partly fills an enormous 655-metre-deep (2,148-foot) cauldron-like depression that formed around 7,700 years ago when the Mount Mazama volcano collapsed during a cataclysmic eruption.

The lake itself is some 592 metres (1,943 feet) deep, making it the deepest in the United States, and the ninth deepest lake in the world.

What's particularly unusual about this lake is how relatively empty it is. According to the US National Park Service, fish are not native to the lake, and the species that exist there now were introduced between 1888 and 1941.

Six species were originally introduced, but only two have survived: rainbow trout and kokanee salmon.

The relative emptiness of Crater Lake is actually what gives it its incredible colour. As the National Parks website explains:

"Water molecules, just plain water with no sediments, algae, pesticides, or pollution, will absorb all the colours of the spectrum except the blues. Those wavelengths will bounce back and make the water appear blue.

The key is to have relatively pure water and lots of it. There has to be enough molecules to absorb all the other colours. (There are 4.6 trillion gallons of water in the lake, so it works really well)."

At a depth of about 120 metres (394 feet), a particular type of moss from the Fontinalis genus is found to grow, and the only place that this moss is found near the surface is on the Old Man of the Lake.

But how did it come to be upright in the water, and how has it managed to stay like that for so long?

Being 9 metres long (30 feet) with a diameter of about 61 cm (2 feet), the Old Man of the Lake should be floating horizontally. So what's making it orient vertically?

No one's been able to come up with a definitive answer yet, but it's been suggested that when it slid into the lake more than a century ago, rocks had become tangled up in its roots. These natural anchor points would have immediately oriented the stump to float vertically.

The only problem with this hypothesis is there are no rocks attached to the log now, and there's no definitive evidence of them ever having been there, so it's extremely difficult to prove.

But it's been argued that the submerged end would have become denser and heavier over time as it was soaked through, while the exposed end remained perpetually dry.

"This apparent equilibrium allows the log to be very stable in the water," the Crater Lake Institute explains.

The truth behind the Old Man of the Lake might be obscured forever, but as National Park ecologist Mark Buktenica told CBS, "I'm okay with not knowing."