Thousands of Stunning, Ancient Cave Art Drawings Have Been Found Deep in The Amazon

More than 12,000 years ago, near the end of an ice age, humans hunted mastodons: ancient mammals that resembled a cross between mammoths and elephants. But by about 11,600 BC, humans had likely killed many of the mastodons off.

At least, that's the leading theory among many paleontologists. A recent discovery bolsters it: Researchers recently uncovered thousands of drawings from an ice-age tribe hidden deep in the Amazon rainforest.

The drawings are spread across three rocky shelters in Colombia's Serranía La Lindosa region. They were first painted between 12,600 and 11,800 years ago. The largest shelter alone, Cerro Azul, has drawings covering more than 2.5 miles of its surface.

The images show some of South America's earliest inhabitants and their interactions with ice-age animals, including giant sloths, ancient llamas, and ice-age horses.

Some drawings, like the one below, even depict what experts think are mastodon hunts. 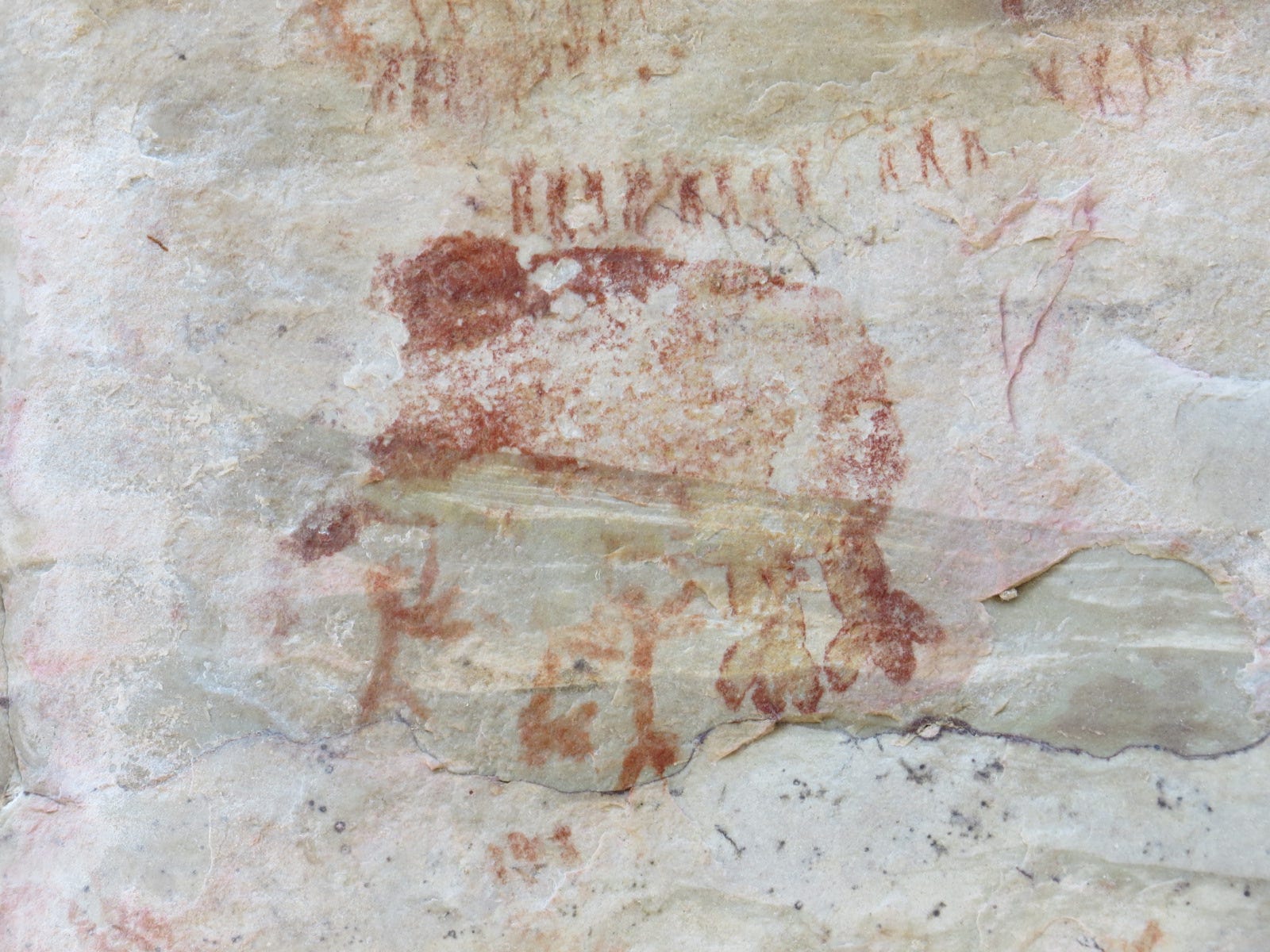 Many of the images show unusual levels of detail for such ancient art, according to José Iriarte, a professor of archaeology at the University of Exeter and a leader of the team that made the discovery.

"The ice age horse had a wild, heavy face," Iriarte told The Guardian. "It's so detailed, we can even see the horse hair. It's fascinating."

The researchers published a study about the three sites in April in the journal Quaternary International. But on Monday, the University of Exeter released a statement with information about the discovery to coincide with the sites' coverage in an episode of Jungle Mystery: Lost Kingdoms of the Amazon, a documentary series set to air in the UK starting Saturday.

Mark Robinson, an environmental archaeologist at the University of Exeter and co-author of the April study, said in a statement that the people who produced these paintings likely moved into South America at a time of "extreme climate change." The ice age was ending. 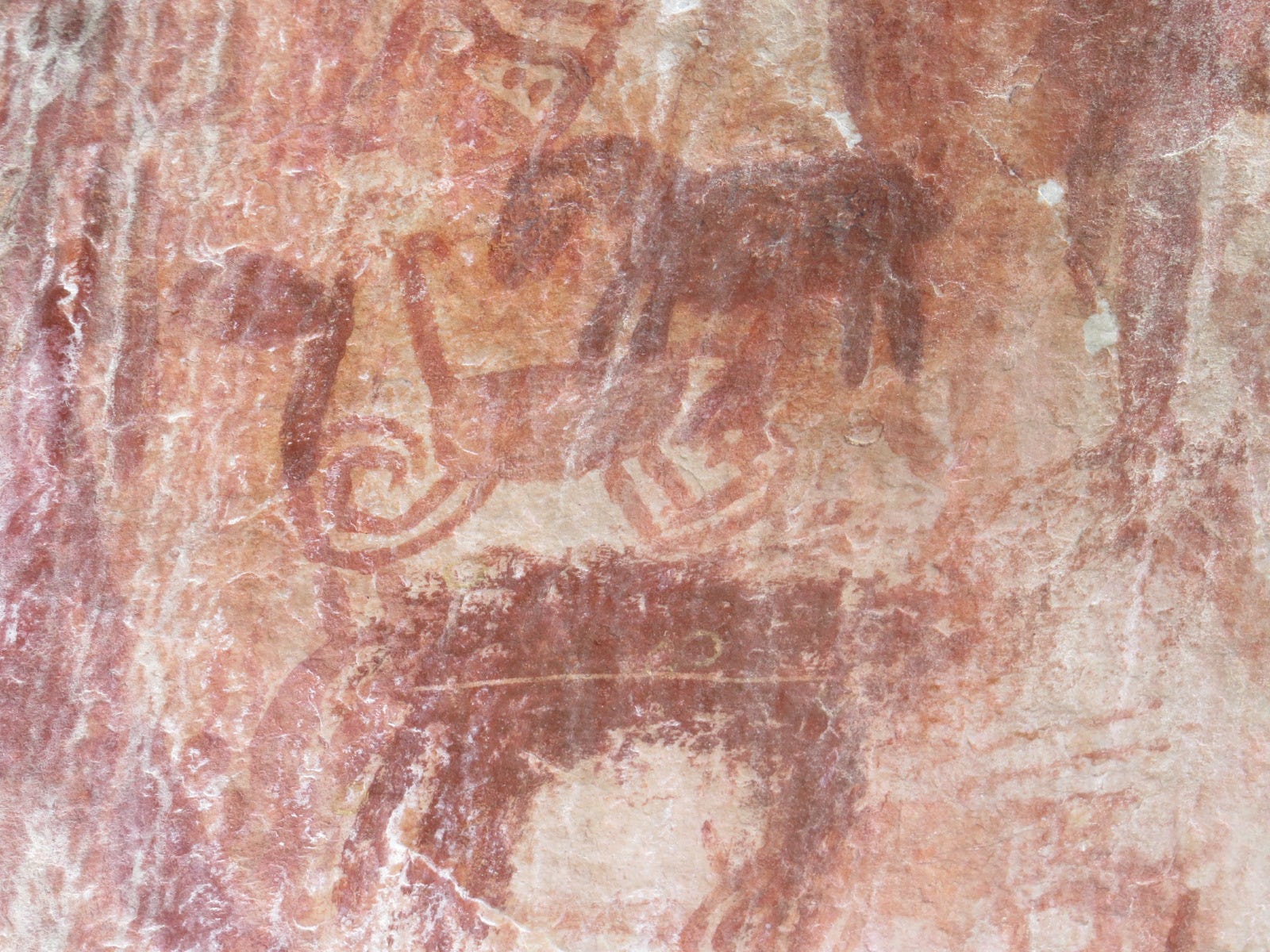 "The Amazon was still transforming into the tropical forest we recognise today," he said. "The paintings give a vivid and exciting glimpse in to the lives of these communities. It is unbelievable to us today to think they lived among, and hunted, giant herbivores, some which were the size of a small car."

The paintings are so vast and numerous that they will likely take many years to study fully. Plus, Jeison Lenis Chaparro-Cárdenas, an anthropologist at the National University of Colombia and a member of the research team, told Business Insider that "the vast majority" of cliffs in the region had not yet been fully explored.

A deeper look into the lives of prehistoric Amazonians

In addition to ancient megafauna, the cliff and cave drawings depict alligators, tapirs, monkeys, turtles, serpents, and porcupines. They also include geometric shapes, as well as everyday scenes showing people hunting and interacting with plants and trees.

"There are many things and moments of excitement and amazement," Chaparro-Cárdenas said. He added that most images revolved around a common theme: "the majesty of the nature that surrounded them and with which they interacted in their daily lives." 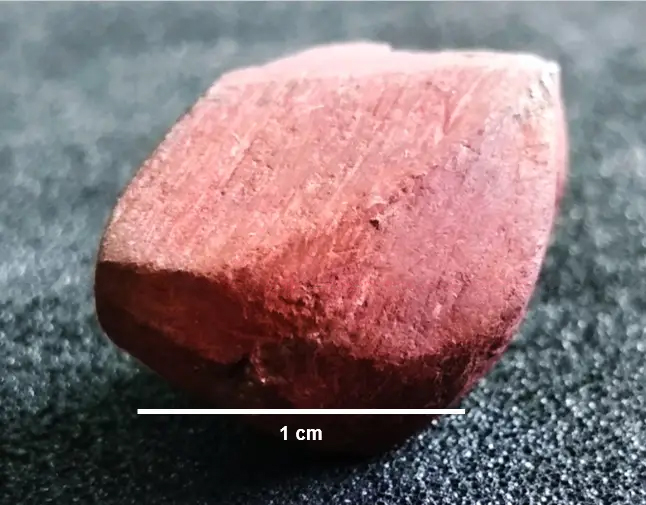 A tool used to paint with ochre. (Jose Iriarte)

The team conducted soil excavations around the rock-art sites to find clues about how the inhabitants scraped clay to extract ochre, a pigment they used to make the drawings.

Those investigations revealed the remains of animals likely eaten by the ancient people, including piranhas, turtles, armadillos, and capybaras, according to Chaparro-Cárdenas. Modern-day inhabitants of the Amazon rainforest still eat many of the animals found at the sites.

"This shows a great variety of resources that were used by the inhabitants of the Amazon for more than 12,000 years," Chaparro-Cárdenas said.

The team first began studying the region in 2014, two years before the Revolutionary Armed Forces of Colombia (FARC) struck a peace treaty with Colombia's government. The Serranía La Lindosa region falls under FARC territory, and entering safely still requires careful negotiations with the guerilla group, according to The Guardian.

The region also has many natural hazards. Poisonous snakes and caimans inhabit the area, which is an hourslong journey from the nearest town.

At one point, a large venomous bushmaster snake blocked the research team's path. They had to walk around it, knowing they were far from any hospital, The Guardian reported.

"You're in the middle of nowhere," Ella Al-Shamahi, an archaeologist who worked with the team on the forthcoming documentary, told The Guardian. But she added that braving the dangers was "100%" worth it.