Thousands of Spiders Worked Together to Build This Giant Communal Web

A giant web has been spotted this month along a quiet roadside in Dallas, Texas, and researchers claim that it's been formed by thousands of non-venomous spiders working together to catch prey.

The web has been described as "football-field length" and "draping the trees like shrouds", according to a local entomologist. Ignoring for a second how terrifying that is, the megaweb is actually quite fascinating given the fact that spiders are usually solitary creatures, and it's turned into something of a tourist attraction.

"Someone stepping off the road for a closer look will see thousands of lanky spiders darting among the webs that extend up to 40 feet [12 metres] into the trees," entomologist Mike Merchant from Texas A&M University AgriLife Extension Service said in a press release. "There is a surreal quality to the extensive webbing covering these trees."

Surreal is one word to describe a giant web built by thousands of spiders working with a single goal in mind, but probably not the one we would have used. So what exactly is going on here?

Even though spiders normally work alone to build their webs, some species do exhibit social tendencies. And although rare, it's not unheard of for them to group together in certain conditions in order to catch large amounts of prey. This also happened back in 2007 at Lake Tawakoni State Park in Texas.

"At the time, the discovery of the web was more than creepy," said Merchant. "Finding spiders working together to build a huge web in what was more of a cooperative or 'communal' scenario was a real surprise for many experts."

So what are those certain conditions? Researchers have since hypothesised that the reason the spiders came together was a 'perfect storm' of weather conditions that resulted in an overwhelming amount of small insects such as midges being released into the ecosystem at once.

In these favourable conditions, spiders working together to build a megaweb can catch way more biomass than they could alone – and incidentally there just so happens to be an overabundance of flying insects in Dallas this summer. "Without lots of food, these communal webs just don't seem to form," he adds.

Those spiders working on the giant web back in 2007 were eventually classified as belonging to the species Tetragnatha guatemalensis. Although the spiders building this new nest haven't yet been identified, it's believed that they belong to the same family. 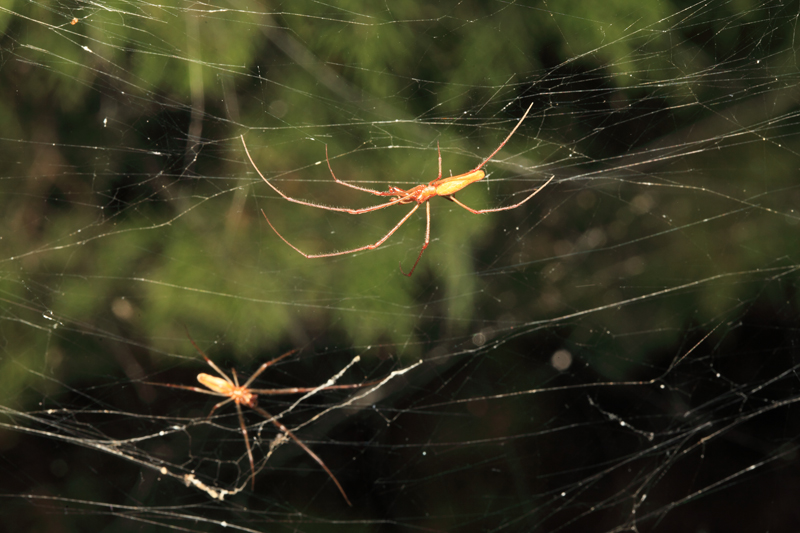 The good news is that these spiders usually aren't aggressive to each other, or humans. Despite the fact that these megawebs have been known to take down bats, birds and larger insects, Merchant explains that we don't need to worry too much about the spiders as long as we leave them alone.

"Insecticides or other treatments are really unnecessary as this spider is essentially harmless and, although the communal nest may look spooky, they too are basically benign and are a sight more to be appreciated than feared," said Merchant.

OK, we see his point. But we still can't help but wonder what spiders need a football-field sized web for, unless they're planning to start catching prey that's more human-sized. After all, how many midges can thousands of spiders eat?