Three new mosaics have been excavated by archaeologists in Turkey's southern province of Gaziantep, as part of a seven-year expedition to discover the secrets of Zeugma - an ancient Greek city founded in 300 BC.

The excavation of Zeugma, being carried out by 25 students led by archaeologist Kutalmış Görkay from Ankara University in Turkey, begin in 2007 in an effort to rescue the ancient treasures from the waters of a flooded dam built on the Euphrates River about a kilometre away. "Of particular concern was the removal of Zeugma's mosaics, some of the most extraordinary examples to survive from the ancient world," Matthew Brunwasser writes at Archaeology.org.

Around 80 percent of the city has been underwater for over a decade, but the team is continuing to unearth some incredible artefacts to help them piece together what life was like in one of the most important trade centres of the Eastern Roman Empire. According to Jenny Zhang at My Modern Met, "Zeugma" means "bridge" or "crossing" in ancient Greek.

Founded by Seleucus I Nicator ("the Victor"), one of Alexander the Great's generals, the city of Zeugma was home to 80,000 citizens at its peak. With the fall of the Roman Empire, so too did Zeugma fade into obscurity, after being destroyed by Persian forces in AD 253.

Most recently, Görkay and has team have been focussing on an enormous building, called Muzalar House, thought to have been inhabited by one of the city's most elite families. Having found three beautifully coloured mosaics inside, Görkay told Brunwasser that these elaborate displays would have decorated the walls of the home with images that highlighted what their owner was most interested in - or what they wanted to be seen as being most interested in.

"They were a product of the patron's imagination. It wasn't like simply choosing from a catalogue. They thought of specific scenes in order to make a specific impression," he said. "For example, if you were of the intellectual level to discuss literature, then you might select a scene like the three muses. They are also a personification of good times. When people drank near this mosaic, the muses were always there, accompanying them for atmosphere."

The residents of Muzalar House evidently liked having a good time, because one of the three newly discovered mosaics depicts nine rather handsome-faced muses. The centre portrait has been identified as Muse Calliope, and she is surrounded by portraits of her eight sisters. "According to ancient Greek poet Isiodos, Calliope was the greatest and finest of the nine Muses, the protector of Epic poetry and arts," says Zhang at My Modern Met.

The second mosaic unearthed in Turkey this month depicts Oceanus and Tethys - the former believed by the ancient Greeks and Romans to be the divine personification of the sea, and the latter his sister, whose children were the ocean nymphs, also known as the 3,000 Oceanids. The team suggests that the special glass mosaic pieces used in this piece were produced for it alone.

The third mosaic is slightly smaller than the other two, and depicts ΘΑΛΕΙΑ - one of the nine muses, who was the daughter of Thalia and Zeus.

Archaeologists typically prefer to leave excavated mosaics in situ, as shifting them can be risky, but following a robbery at the site a few years ago, they are now working on relocating them to a local museum.

"From now on, we will work on restoration and conservation. We plan to establish a temporary roof for long-term protection," Görkay told the Hurriyet Daily News. "We estimate that the ancient city has 2,000 to 3,000 houses. Twenty-five of them remain under water. Excavations will be finished in the Muzalar House next year." 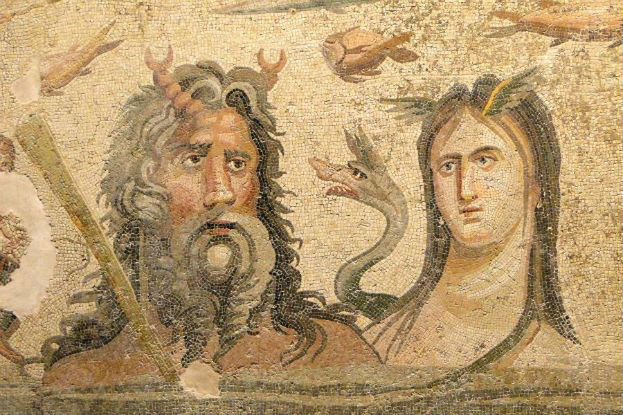 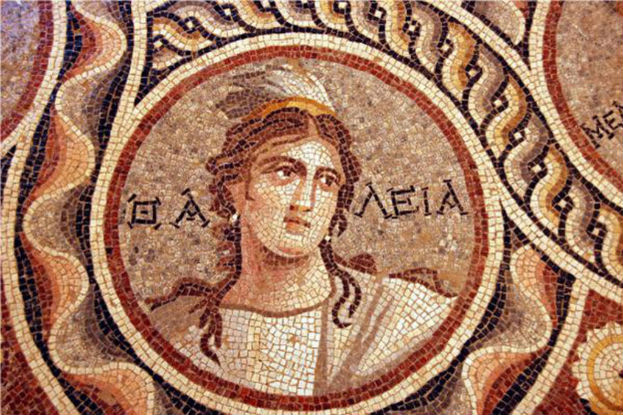 Image of ΘΑΛΕΙΑ, one of nine muses. Credit: Ankara University 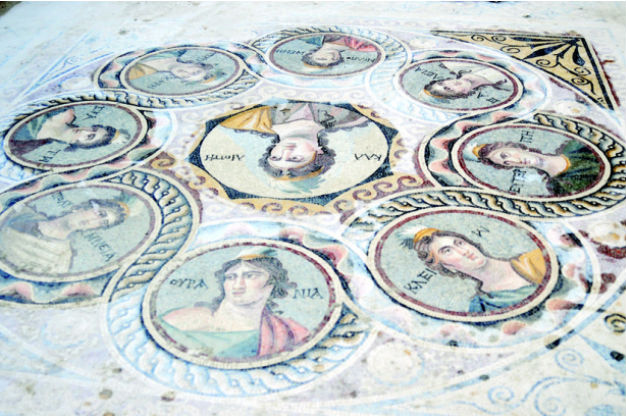