A court in Tanzania has sentenced two Chinese men to 30 years in prison each after they were found guilty of illegally possessing 706 elephant tusks, local media has reported. It's the latest verdict handed out in the crackdown on poaching in the region, and is one of the heaviest sentences set so far.

"Considering the evidence ... and the huge loss that the nation has suffered for the killing of 226 elephants, it is obvious the accused are a real threat to the elephant population," magistrate Cyprian Mkeha said in his ruling, local newspaper The Citizen reports.

The two men entered the country in 2010 under the guise of being garlic and marine product importers, before being arrested in 2013 with hundreds of tusks stashed away in garlic bags. Based on this haul, state lawyers calculated that they'd killed at least 226 elephants during the three years they were active.

Xu Fujie and Huang Gin were also found guilty of trying to bribe the police and officers from the national wildlife department, and were sentenced to an additional five years in prison for that charge.

They have the option of paying a record fine of 54.3 billion Tanzanian shillings (US$25 million) each to avoid jail time, but their lawyers say they plan to appeal the verdict in the hopes of being let off altogether. 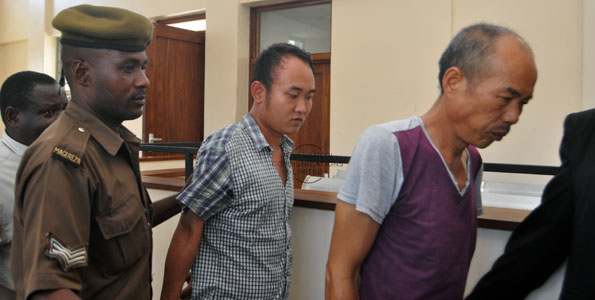 Considering the recent hard-line approach against poachers, they court isn't likely to go easy on them. Between 2009 and 2014 in Tanzania, the elephant population decreased from 110,000 to around 43,000 - a drop of 60 percent. That staggering decline coincided with a spike in poaching, most of which occurred to meet the demand for ivory and rare Chinese medicine ingredients coming out of Asia.

And elephants aren't the only victims, with rhino populations dwindling after a massive 9,000 percent increase in poaching between 2007 and 2014 in South Africa alone.

All this isn't only terrible for the ecosystem, it's also a blow to Tanzania's economy, which relies heavily on wildlife tourism, and it's led to President John Magufuli publicly cracking down on the illegal activity.

Last year, four other Chinese men were sentenced to 20 years in prison each for smuggling ivory horns. And in October, Chinese businesswoman Yang Feng Glan, AKA the Ivory Queen, was arrested for running a network that smuggled out the tusks of more than 350 elephants. She's currently awaiting trial.

Kenya has also made a string of arrests and charges against people involved in the trade, which experts say is setting an important precedent. "It’s very motivating for our rangers [to see poachers] lose a lot of money and spend long terms in Kenyan prisons," Paul Udoto from the Kenya Wildlife Service told the South China Morning Post back in 2014.

The good news is that pressure is also coming from the 'demand' side of the supply chain, with a report showing that the price of elephant ivory in China has dropped by half over the past 18 months, from US$2,100 per kg to US$1,100.

This is partly thanks to an agreement between Chinese president Xi Jinping and Barack Obama to work together to stop the ivory trade, and it's great news, because arresting animal killers is one thing, but until people stop spending exorbitant amounts of money on animal products, there's going to be another 50 poachers waiting in the wings to replace them.

Let's just hope this type of broadscale change will help to protect wildlife from poaching in the future, because with current kill rates, we only have a few decades left before our favourite animals are gone forever.