The statue head of King Amenhotep III. (Egyptian Ministry of Tourism and Antiquities)

Archaeologists in Egypt have discovered two colossal limestone statues of King Amenhotep III that are fashioned to look like sphinxes, according to the Egyptian Ministry of Tourism and Antiquities.

An Egyptian-German archaeological mission discovered the sphinx-like statues, which were originally about 26 feet (8 meters) long when they were created for King Amenhotep III, an 18th-dynasty king whose reign (about 1390 BCE to 1353 BCE) is known for its peace and prosperity, and whose grandson was King Tutankhamun.

The team unearthed the sphinxes in the ancient capital of Thebes (modern-day Luxor) at the mortuary temple of King Amenhotep III, which was called the "Temple of Millions of Years" by ancient Egyptians, the Egyptian Ministry of Tourism and Antiquities announced in a statement on January 13.

The sphinx-like Amenhotep III depictions are known as colossi, or larger-than-life statues. The archaeological mission – the Colossi of Memnon and Amenhotep III Temple Conservation Project, which started in 1998 – also discovered ruins of columns and walls at the mortuary temple that ancient Egyptians had decorated with ceremonial and ritual scenes, according to Al-Monitor, a news outlet that covers the Middle East.

The two colossi show Amenhotep III wearing a mongoose-shaped headdress, a royal beard and a broad necklace, Mustafa Waziri, secretary-general of the Supreme Council of Antiquities, said in the statement. A restoration revealed an inscription across the chest of one of the colossi that read "the beloved of Amun-Re," a reference to Amenhotep III.

"This temple housed a large number of statues, models and wall decorations, before it was hit by a devastating earthquake in 1200 BC," Egyptolologist Hourig Sourouzian, the head of the archaeological mission, told Al-Monitor. 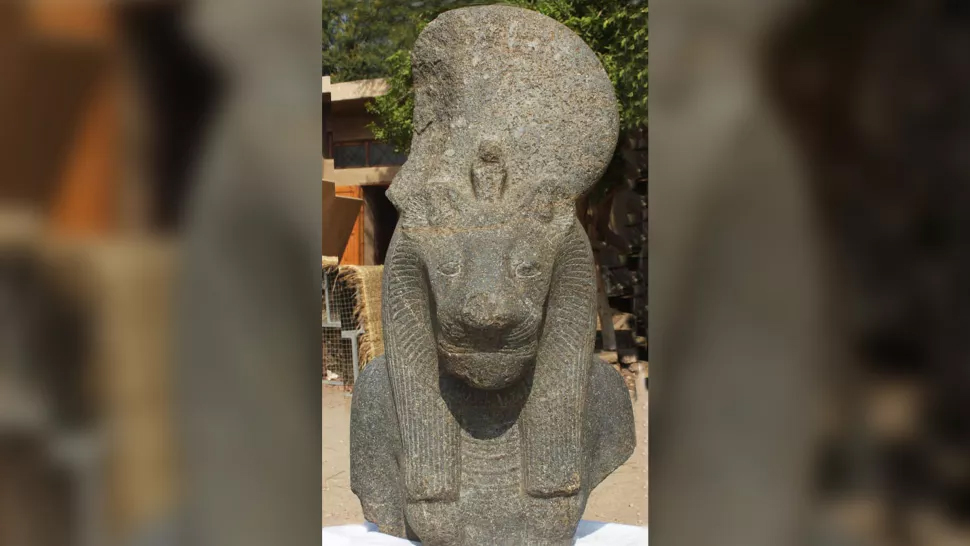 (Egyptian Ministry of Tourism and Antiquities)

Above: Lion head of goddess Sakhmet, who had the body of a woman.

The mission also found three fairly well-preserved statues of the powerful goddess Sakhmet (also spelled Sekhmet), who is portrayed as having the head of a lion on the body of a woman. The Sakhmet statues were located at the façade of an open interior courtyard, known as a peristyle court.

"In the peristyle, the newly discovered pieces of wall relief reveal new scenes of the Heb-Sed, a festival of the king started after 30 years of his rule and repeated every three years thereafter," Sourouzian told Al-Monitor.

The Heb-Sed festival was "one of the most important feasts for ancient Egyptians that celebrates the end of the 30th year of the king's ascension to the throne," Abdel Rahim Rihan, director general of research, archaeological studies and scientific publication in South Sinai at the Ministry of Tourism and Antiquities, told Al-Monitor.

"The depictions of this festival show the king on his throne in full strength, with the crowds around him happy and excited, waiting for his speech promising them another 30-year reign full of prosperity and opulence. On this occasion, the king would also make offerings to the gods."

During the festival's highpoint, the pharaoh would have run around a race track in the courtyard to demonstrate his physical prowess, Rahim Rihan added.

The conservation project had four parts, the archaeologists noted. After surveying the site, the team investigated the ruins, then plans to put all of the newly documented artifacts back in their original spots within the temple. Finally, the team will manage the site, including how to best preserve it going forward, Sourouzian said.