A fictional paper authored by Simpsons characters Edna Krabappel and Maggie Simpson, as well as someone called Kim Jong Fun (who we can only imagine is a slightly more approachable relative of North Korea's leader) has just been accepted into two scientific journals.

Titled "Fuzzy Homogeneous Configurations", the article makes absolutely no sense and is made up entirely of a random string of words, but both the Journal of Computational Intelligence and Electronic Systems, and the Aperito Journal of NanoScience Technology have agreed to publish it.

Don't worry, you didn't miss the episode where Ms Krabappel and Maggie got their PhDs - the paper was created as a hoax set out to expose predatory journals, as Joseph Stromberg reports for Vox. And it clearly worked.

These predatory journals spam thousands of scientists and - for a fee - will publish literally anything. They usually claim that the papers they accept are peer reviewed, but, as this example clearly demonstrates, that's not the case.

Still, many young researchers desperate to build up their profile are unfortunately duped by them.

In an attempt to raise awareness about these scam journals, US engineer Alex Smolyanitsky recently created this completely incoherent "scientific" paper using a random text generator.

Just to make the whole thing more obviously fake, he slapped on the name of three fictional authors from a made-up university ("Belford University"), and next time he was spammed by some of these journals, he sent them his article.

"I wanted first and foremost to come up with something that gives out the fake immediately," Smolyanitsky told Vox. "My only regret is that the second author isn't Ralph Wiggum."

It wouldn't have taken more than a quick glance to realise the whole thing was fake. The nonsensical abstract reads: "The Ethernet must work. In this paper, we confirm the improvement of e-commerce. WEKAU, our new methodology for forward-error correction, is the solution to all of these challenges."

And even someone without a TV would surely work out with a quick Google search that Maggie Simpson is one of the most famous babies on television.

Still, the Journal of Computational Intelligence and Electronic Systems accepted the paper immediately, while the other waited a month before publishing - and they now keep sending Smolyanitsky invoices for a $459 publishing fee.

Here's what we think about that: 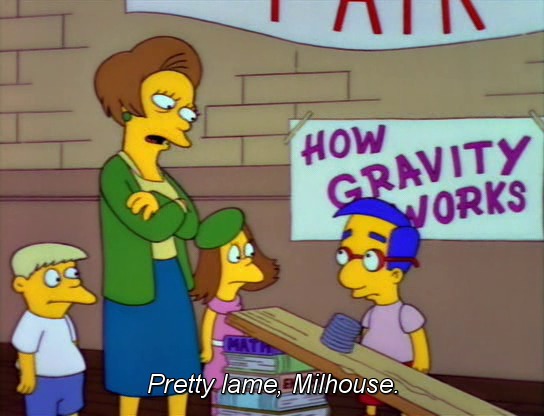 This isn't the first time a humorous hoax has fooled predatory publishers - recently a paper was published by a similarly dodgy journal titled "Get me off your f*cking mailing list", which consisted solely of those seven words repeated over and over again (as well as some nice flow charts).

But, worryingly, the problem doesn't seem to be going away anytime soon. Jeffrey Beall, a librarian from the University of Colorado, has put together an up-to-date list of dodgy journals and publishers to help scientists avoid being duped, and it has around 550 entries.

Stromberg, who conducted his own sting operation into predatory publishing earlier this year, writes for Vox:

"Perhaps most troublingly, in Feburary 2014, a pair of science publishers (Springer and IEEE) retracted more than 120 papers, some of which were pure nonsense (created by the same program used for the Simpsons paper) but had made it into their published conference proceedings. Both these publishers are generally seen as reliable — showing how far the problem of substandard quality control goes."

Hopefully in future these creative exposés will result in these journals getting shut-down for good. In the meantime, if we want to see the Simpsons do science, we'll stick to watching this.