Up to 7,000 Asylum Graves Are Thought to Be Hidden Under The University of Mississippi

The bodies of as many as 7,000 former patients of Mississippi's first mental institution could be buried in the grounds of what is now the University of Mississippi's Medical Centre campus, researchers say.

Completed in 1855, the Mississippi State Lunatic Asylum housed some 35,000 patients between 1865 and 1935, thousands of whom were eventually buried in the facility's graveyard, alongside churchgoers, paupers, and others.

For decades those graves were virtually forgotten, until workers in 2013 made a grisly discovery.

During construction of a road on the campus of the University of Mississippi Medical Centre (UMMC), a work crew uncovered 66 unmarked graves belonging to one of the asylum's cemeteries.

The next year, when work began on a new parking garage alongside the Medical Centre's dental school, another 1,000 coffins were found – a figure that only grew once radar scans led officials to estimate that the site contained more than 2,000 graves. 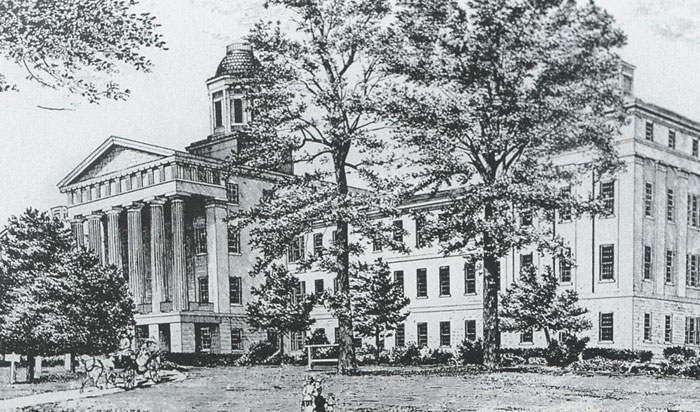 Now, revised estimates are putting that number at close to 7,000 bodies buried across the 8-hectare (20-acre) site, and as the headcount grows, so too does the estimated cost of respectfully but practically relocating the asylum's former wards.

At a cost of US$3,000 to exhume and rebury each body, officials were looking at about $21 million to move the cemetery inhabitants – but now researchers are hoping to handle the process themselves, taking the opportunity to study and commemorate the history of the Mississippi State Lunatic Asylum as they carry out the exhumations in-house.

"It would be a unique resource for Mississippi," anthropologist Molly Zuckerman from Mississippi State University told Jerry Mitchell at The Clarion-Ledger.

"It would make Mississippi a national centre on historical records relating to health in the pre-modern period, particularly those being institutionalised."

Together with a team of archaeologists, historians, and other researchers, Zuckerman has formed a body called the Asylum Hill Research Consortium (AHRC), which hopes to win grants to learn more about the former asylum's history while handling the exhumations.

Thanks to the support of reformer Dorothea Dix – dubbed "the angel of the madhouses" – the Mississippi State Lunatic Asylum was built in 1855 to provide a more humane way of treating those with mental illness, who at the time were kept "in jails, or dungeons... chained in closets and attics".

Despite the ambitions of the new $175,000 asylum, conditions were tough, with 20 percent of those admitted in the first 22 years of the facility perishing inside it.

At its peak, the asylum housed 6,000 patients and had expanded to encompass a neighbourhood of houses, a school, and a church.

After 80 years of existence, by which time the institution had admitted in excess of 35,000 patients, the asylum closed, with patients moving to the new Mississippi State Hospital – although the graveyards and cemeteries remained in place, until they were eventually forgotten and built over.

In the words of local doctor Luke Lampton, who has written about the history of the asylum, these former patients were essentially "forgotten twice – when they were originally sent there for treatment and after they were buried there", as he told the The Clarion-Ledger back in 2014.

What better way of righting that wrong, than of remembering these people now, by learning what we can about who they were, and what they went through in Mississippi's first mental institution?

"We have inherited these patients," said one of the AHRC researchers, Ralph Didlake, from the UMMC's Centre for Bioethics and Medical Humanities.

"We want to show them care and respectful management."