Those 'Volcanic Flows' on Mars Might Not Be Lava After All, but Mud

The northern lowlands and sedimentary regions of Mars are dotted with curious formations. Tens of thousands of conical hills, many topped with small craters, and surrounded by deep channels scoured from the surface by flowing liquid.

That sounds a lot like volcanoes found here on Earth - but on a planet like Mars, where we can't easily go and look, and where conditions can be so very different from Earth's, you have to be wary of making assumptions.

The features on Mars may resemble Earth's lava flows, but there's also a type of volcano on Earth that spews up something completely different - sludgy, oozy mud.

And scientists have just found that, under the very low atmospheric pressure and temperature conditions found on Mars, mud can flow very differently from Earth's mud volcanoes. In fact, it can look a heck of a lot like lava.

"We performed experiments in a vacuum chamber to simulate the release of mud on Mars," said planetary scientist Lionel Wilson of Lancaster University in the UK.

"This is of interest because we see many flow-like features on Mars in spacecraft images, but they have not yet been visited by any of the roving vehicles on the surface and there is some ambiguity about whether they are flows of lava or mud." 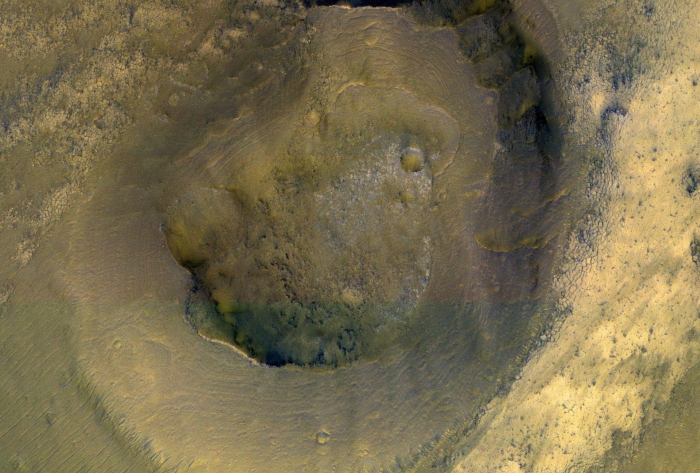 Scientists have long thought that large amounts of water once flowed freely on the Martian surface, released for a very short period of time and eroding the landscape before drying up, or being covered by volcanic activity and sediments deposited by the wind.

But soggy sediments trapped under the surface could have later been pushed up and out by underground pressure, creating mud volcanoes. This is what the researchers wanted to figure out.

In both sets, mud was poured over sand cooled to a temperature consistent with the surface temperature of Mars, -20 degrees Celsius. The researchers then studied and characterised the way the mud flowed across that surface.

In terrestrial conditions, the mud flows didn't expand, form an icy crust, or create lava-like flows. But the mud flows under Martian conditions did - because of the lower atmospheric pressure.

When atmospheric pressure lowers, so too does the boiling point of water. That's why water boils at a lower temperature at higher altitudes; if you were to find yourself floating in space without protective gear, saliva would boil right off your tongue (among other, more fatal things).

The effect on mud flows in simulated Martian conditions is fascinating. The water in the mud begins to boil and evaporate, and that process absorbs the latent heat from the vapour. This cools the mud, and a crust freezes on its surface.

"Of course, we already know that liquid water begins to boil sooner under low pressure," said planetary scientist Ernst Hauber of the DLR Institute of Planetary Research in Germany.

"However, the impact of this familiar effect on mud has never been investigated in an experiment before. Once again, it turns out that different physical conditions must always be taken into account when looking at apparently simple surface features on other planets. We now know that we need to consider both mud and lava when analysing certain flow phenomena."

Pahoehoe lava in the Galapagos. (Jason Hollinger/Flickr, CC BY 2.0)

What happens after the crust freezes is where it gets really good. The mud flow behaves like the pahoehoe lava flows seen in Hawaii and Iceland. The mud still pushing up from underneath erupts through the icy crust, oozing out and refreezing into a new flow lobe. But, while the process is similar, the shape of the mud flows is different, the researchers found.

While there are limitations to the study - Martian gravity couldn't be replicated, for instance - the research does show that mud volcanism wouldn't be impossible on the Red Planet after all. And the research has important implications for other kinds of volcanism in the Solar System, such as the ice volcanoes thought to exist on far objects such as Titan and Pluto.

It shows that, even though we may think we understand what's going on, there could be environmental conditions that change the processes in fundamental ways.

As geophysicist Petr Brož of the Czech Academy of Sciences said, "our experiments show that even a process as apparently simple as the flow of mud - something that many of us have experienced for ourselves since we were children - would be very different on Mars."