When we peer out into intergalactic space, evidence for dark matter is everywhere. It's in the rotation of galaxies, which cannot be accounted for by observable matter alone. It's in the way galaxies cluster together, and the path of light as it travels through the Universe. We can't see dark matter directly, but the effects it has on other objects has allowed us to map it pretty comprehensively on large scales.

Closer to home, however - actually within the Milky Way galaxy - and on sub-galactic scales, the effects of dark matter are much smaller, and therefore a lot more difficult to map. But a new technique could finally tease out where the Milky Way's dark matter is hiding, by looking for a telltale warp in the light from stars when dark matter passes in front of them.

Dark matter is one of the most perplexing phenomena in the cosmos. We can't detect it directly, so we don't know what it is, but we do know that the amount of gravity in the Universe can't be accounted for by the normal observable matter - what we call baryonic matter - alone.

In the 1930s, astronomer Fritz Zwicky found that, if galaxies in the Coma cluster were held together by normal matter alone, their rotation speed would exceed escape velocity for objects inside them. If these galaxies only consisted of baryonic matter, they would fly apart.

Something was creating extra gravity. We don't know what that something is, so we call it dark matter. The effects of dark matter have since been observed in other ways, and cosmologists calculate that it makes up around 85 percent of the matter in the Universe.

One of those effects is gravitational lensing. As per the theory of general relativity, mass curves spacetime around it. For smaller objects, the observable effect of this is negligible, but for truly massive objects - say, a cluster of galaxies - the curvature of spacetime is much more pronounced, resulting in a curved path of light as it travels through that region. 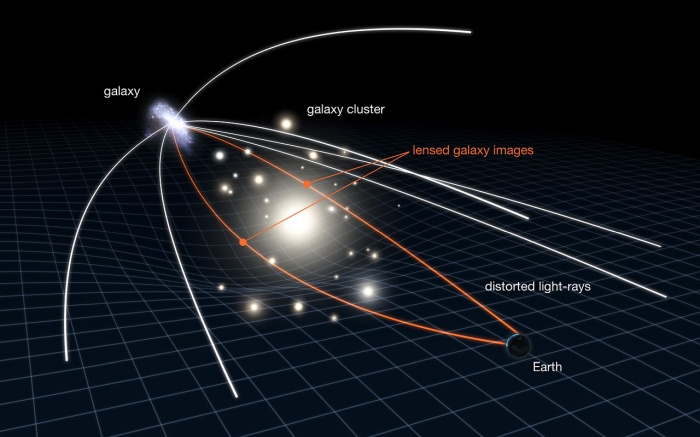 In their new paper, a team of researchers led by theoretical physicist Siddharth Mishra-Sharma of New York University proposes a framework for detecting gravitational lensing in individual stars in the Milky Way, in order to detect local dark matter.

When dark matter passes in front of a star, it should - theoretically - alter the star's brightness in such a way that the star appears to move. This has been predicted for decades, and is called astrometric weak gravitational lensing (astrometry is the study of the motion of stars), but the effect is so small, detecting it is an inversely proportional challenge.

Mishra-Sharma and his colleagues propose that astrometric weak gravitational lensing may be detectable not in individual stars, but in groups.

"In this paper, we propose a new technique to characterise the population properties of galactic substructure through its collective lensing effect on distant sources," they wrote in their paper.

"We show that, with near-future astrometric observations, it may be possible to statistically detect populations of cold dark matter subhalos, compact objects, as well as density fluctuations sourced by scalar field dark matter."

With very precise astrometric observations, the team's framework would allow astronomers to infer the presence of dark matter by analysing the distributions of the velocities and accelerations of stars and galaxies. They also applied their technique to a number of simulated scenarios, and found that these distributions vary according to the type of dark matter - so the framework could also help to validate dark matter models.

And they found that the Sun's orbit around the galactic centre would introduce an asymmetry into the distributions, which could help to separate the astrometric weak gravitational lensing signal from noise.

The most comprehensive astrometric catalogue we currently have is from the European Space Agency's Gaia satellite, an ongoing project to map the Milky Way in three dimensions with the highest precision yet. The team did attempt to apply their framework to Gaia data, and found that the noise levels were too high in the dataset to detect a decent signal.

But they also note that future Gaia data releases, as well as upcoming telescopes, could return better results.

"Astrometric datasets deliverable by near-future surveys such as the Square Kilometre Array and The Nancy Grace Roman Space Telescope may harbour the imprint of a substructure characteristic of a range of well-motivated new physics scenarios such as cold dark matter, the existence of compact dark objects, and scalar field dark matter," they wrote in their paper.

"Although the current instrumental noise levels are not conducive to realistic searches for new physics, our proof-of-principle analysis can be carried over and applied to future astrometric datasets, including those in upcoming Gaia data releases, in a straightforward manner."

The research has been published in Physical Review D.