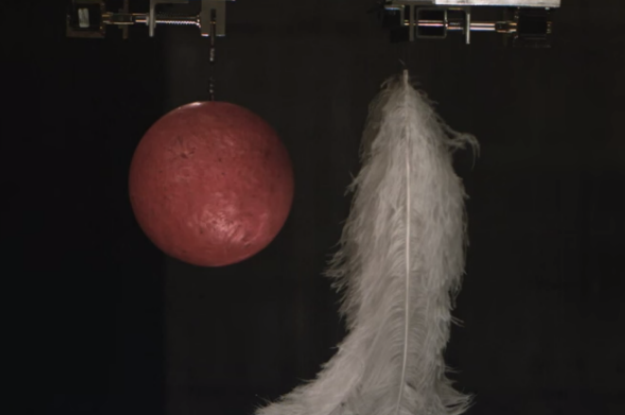 It was Galileo himself who first discovered that in a vacuum, if you were to drop two objects from the same height, they’d hit the ground at exactly the same time, regardless of their respective weights. Of course, on Earth, we rarely - if ever - get the change to see this at play, thanks to a phenomenon known as air resistance.

The combination of bowling ball and feather is the perfect way to demonstrate air resistance, also known as drag. Because the shape of the feather allows it to endure way more air resistance than the bowling ball, it takes much longer to fall to the ground.

British physicist Brian Cox wanted to see this primary-school problem play out in a vacuum, where there is zero air resistance to mess with the results. Filming for his new BBC 2 show, Human Universe, he travelled to the US and visited the NASA Space Power Facility in Ohio. The facility is the world’s largest vacuum chamber, measuring 30.5 metres by 37.2 metres, and has a volume of 22,653 cubic metres.

When not in use, the chamber contains around 30 tonnes of air, but when it’s turned on, all but around 2 grams of air are sucked out to create an artificial vacuum. Watch above to see what happens when a bowling ball and feather are dropped in the chamber under 'normal' conditions and then in a vacuum. If it's enough to make even the most seasoned NASA scientist grin with childlike wonder, you know it's gotta be good.