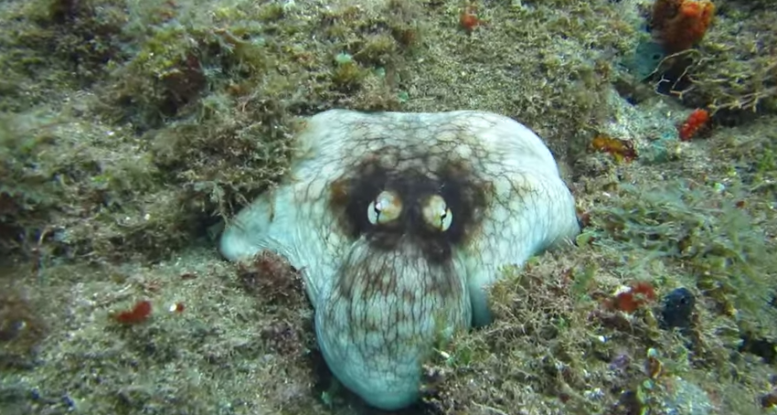 WATCH: An Octopus Shows Off Its Ridiculous Camouflage Powers

To understand how awesome the above footage is, you kind of just have to watch it. It starts perfectly unextraordinarily - a snorkeller swims over what appears to be a normal, empty patch of coral in the crystal clear waters of the Caribbean. No widlife to see here, buddy, move it along.

But then, when he moves in to inspect a shell, an octopus materialises right in front of him, rising up out of the coral like a luminous, pulsating, angry blue smurf.

"This guy took me completely by surprise ... I had literally no idea he was there until I was about a metre away," writes Jonathan Gordon over on his YouTube channel.

Even after watching it on repeat, we’re still struggling to spot its camouflaged hiding spot before it decides to show itself.

So what makes octopuses (yes, that is the correct plural term) so good at hiding?

Just like fellow cephalopods, squids and cuttlefish, octopuses contain tiny pigment sacks inside their skin. By contracting or dilating their muscles very precisely, an octopus can control exactly how much light bounces off each pigment, which means they can change into virtually any colour almost instantly.

Scientists are now copying this ability in order to find ways to make invisibility cloaks that respond to our environment and keep us hidden, regardless of background.

We’ve made progress, with researchers last year creating a material that can change colour and texture when voltage is applied to it. But we're still struggling to create the incredibly sophisticated patterns and colour palette that cephalopods have mastered.

Which is unfortunate. Because just imagine the potential for pranks (and far more practical applications) if we could camouflage ourselves as well as the guy in the video above.