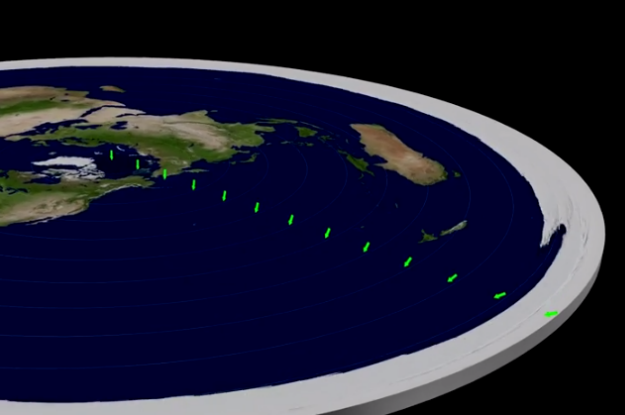 WATCH: Here's What Life Would Be Like on a Flat Earth

"Such a planet shape would be impossible," says Michael from Vsauce in his latest video about a flat Earth. "Anything as massive as the Earth shaped like a flat disc would, under its own gravity, naturally collapse back into a ball." This is why, he adds, everything in space more than a few hundred kilometres in diameter is round.

But what if gravity wasn't even real? What if the Earth really was flat?

Since the time of the ancient Greeks, the consensus among scholars has been that the Earth is round. That's way before Christopher Columbus had anything to do with the debate. The misconception that a few hundred years ago everyone assumed that the Earth was flat likely began in the modern era, says Michael, as, quite literally, a racist insult. "The smear was repeated and published so often, it became accepted as historical fact," he says. "'Flat-Earther' became synonymous with 'anti-science'."

And yet, the modern Flat Earth Society is alive and well, and its members have answers for just about any question you can throw at them. Are these people for real? Probably not most of them, says Michael, but this is the crux of a fascinating concept known as 'Poe's Law'. "An addage which states that at their extremes, parity of extremism and sincere extremism are difficult to distinguish," he says.

Watch the latest episode of Vsauce above to hear Michael give his best scientific explanations for the Earth actually being flat, and see if they hold up.