A simple experiment called Kelvin's Thunderstorm can produce electrical sparks from running water, with no machinery required. The latest episode of Veritasium explains the physics behind the phenomenon. 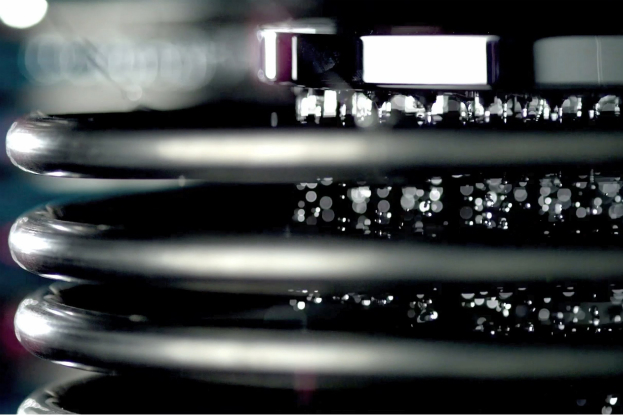 There are some pretty innovative ways of generating electricity, but this has to be one of the coolest we've seen in a long time. Using nothing but two streams of running water travelling through metal mesh, Derek from Veritasium explains in the episove above how you can generate sparks of 5,000 to 10,000 volts of electricity. You can even replicate the experiment at home if you have the right equipment.

The episode helps explain in more detail the physics behind an experiment, which Derek originally demonstrated in his recent collaboration with The Hunger Games (you can watch that below).

So what exactly is going on in Kelvin's Thunderstorm? And if it's possible to generate electricity from falling water, why aren't we doing so every time it rains?

As Derek explains, the process actually involves some pretty simple but fascinating physics. Overall, water is generally neutral in charge, with any positive and negative molecules cancelling each other out. But as water flows out of the two shower heads in the setup, there's some natural variation, and occasionally one side will become more negatively charged than the other.

This feedback results in two streams of differently charged water - one positive and one negative. Over time that charge gets so great, that it jumps across from the negative to the positive side of the metal, causing a spark of electricity, and resetting the system.

While it's extremely impressive and simple to use, the system isn't capable of generating enough electricity to be a viable energy source - even on a small scale - which is why we don't harness it for wider use in society.

Watch the episode above to find out more about Kelvin's Thunderstorm (which is named after Lord Kelvin, who first noticed the phenomenon more than 100 years ago) and how long it would take to charge your phone. Hint: it's not quick.

And here's Derek's original video for The Hunger Games. Even if you're not a fan of Suzanne Collins' trilogy and the resulting films (which we definitely are), it's pretty awesome, if only for the costumes: