If watching a thick, red stream of molten lava pour into the Pacific Ocean like the world's biggest bloody Mary isn't enough to make you gape at how utterly bananas nature can be, how about the moment when the whole thing collapses in on itself?

Last month, the US Geological Survey (USGS) released incredible footage of that lava 'firehose' pouring from a crack in Hawaii's Kilauea volcano, the sea cliffs that supported it collapsed, and it's a stark reminder that nature DNGAF.

The lava tube itself formed on New Year's Eve, when a massive section of the Kamokuna lava delta, in Hawaii's Volcanoes National Park on the southeast side of the Big Island, collapsed into the ocean, exposing the volcano's molten insides.

Since then, the lava tube has been flowing into the Pacific Ocean some 21 metres (70 feet) below the exposure point, as one continuous stream of molten rock stretching up to 2 metres across at its widest point. While it looked spectacular, tourists were advised to keep well away from the exposed lava delta, because as the lava hits the cool ocean waters, it causes a reaction that sends exploding chunks of hot rock and debris back in towards the land.

"When the lava delta collapsed, solid and molten fragments of lava and superheated steam exploded skyward, creating tremendous hazard for anyone who ignored the warning signs and entered the closed area on land or ventured too close to the lava delta by boat," the USGS reported on January 1.

"[It's] definitely the most dramatic firehose event I've ever witnessed in the last three decades of viewing lava," Shane Turpin from Lava Ocean Tours in Hawaii told Phys.org.

Here's footage of the delta collapsing and exposing the lava tube:

And here's the lava tube in all its thunderous glory, filmed on January 25:

Seriously though, that colour:

If all that molten lava streaming through the rock face for over a month non-stop seems kinda unsustainable, it was, because the USGS just announced that the cliffs have collapsed in on themselves, destroying the lava tube in the process.

"Within minutes of HVO (Hawaiian Volcano Observatory) geologists reaching the ocean entry site, the sea cliff seaward of the hot crack collapsed with no warning. Fortunately, they were far enough away to not be in harm's way," the USGS reported on February 2.

"When they arrived, the 'firehose' flow was no longer visible. However, spatter (bits of molten lava) and black sand flying through the steam plume indicated that lava was still flowing into the ocean and interacting explosively with seawater."

The researchers managed to catch the exact moment of the sea cliff collapse on film, and as you can see, it looks like Earth is giving us all a massive shrug as it retreats into the ocean:

As for the Kilauea volcano, it's been erupting continuously since 1983, so while the 'great firehose' might have disappeared for the time being, this certainly isn't the last time we can expect activity from the ancient formation.

"There's no indication of it slowing down or stopping," USGS geologist, Janet Babb, told Phys.org.

Some more footage and images of the incredible lava tube:

A video posted by Captain Kainoa Hauanio (@hawaiianlavaboattours) on Jan 3, 2017 at 9:09am PST 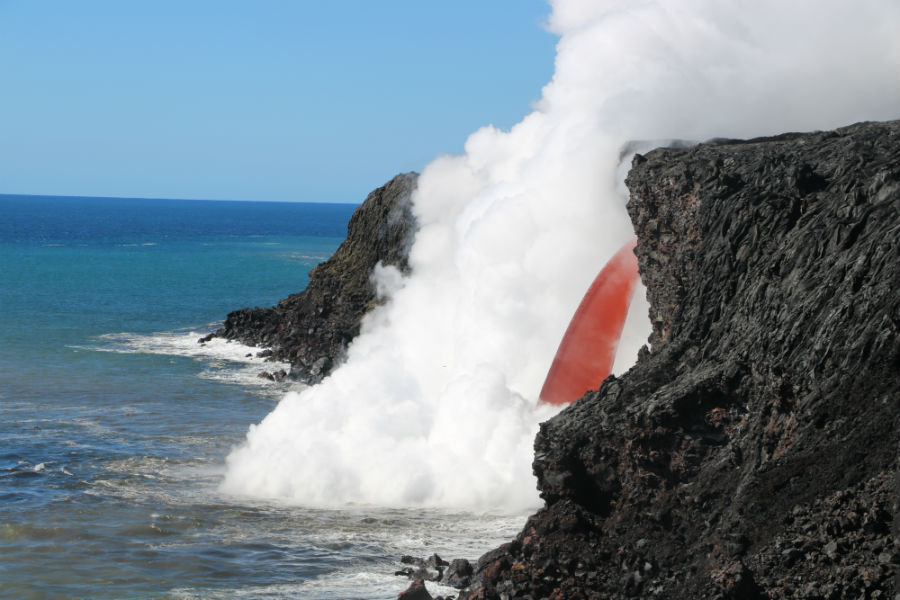