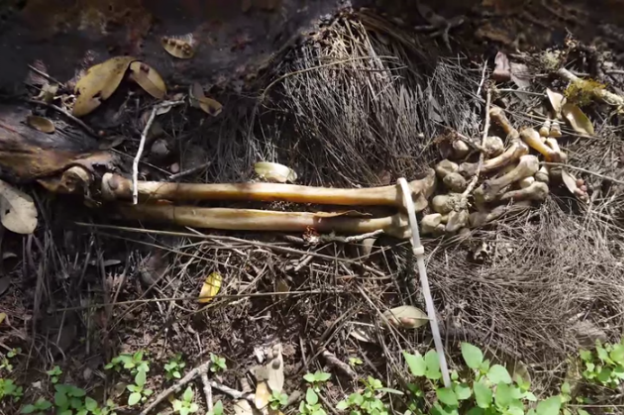 WATCH: Take a Tour of The World's Largest Body Farm

Last month, Vox science writer Joseph Stromberg visited a body farm at the Texas State University's Forensic Anthropology Centre in the US. With 50 bodies on the grounds at any one time, it's the largest body farm in the world, and it exists to help forensic scientists piece together the mysterious circumstances that human remains are found in during police work.

Scattered around the grounds under vulture-proof metal cages, these bodies - which are specifically donated by people before they die - are left out in the elements, so each stage of decomposition can be analysed.

When we die, our bodies will first go through a process of drying out. As our cells digest themselves, their contents start to leak out, which feeds the bacteria that live in our bodies. This allows them to grow and proliferate. All this bacterial activity causes the second stage of decomposition - bloating - because everything the bacteria are feeding on is being converted into gases.

And that sickening, reddish-yellow hue that a corpse will inevitably take on? The process is called 'marbling', and it occurs at the same time as boating, when sulphuric gas is released by the bacteria and binds to the haemoglobin molecules in our blood. This changes the colour of them to an array of rust, orange and yellow, which come through clearly on the surface of the skin.

As soon as a corpse is set out in the Texas body farm, says Stromberg, flies will appear as if from nowhere, and go to town on it. "They especially lay [their eggs] in any orifices, so your head will get a lot of maggots on it - the eye sockets and the mouth and nose. And they'll eat away at that first," says Stromberg. "They're absolutely just crawling all over the body, like, getting up really close to it and taking photos was the most intense thing I did there."

The next stage of decomposition has an even worse name than bloating. Welcome, everybody, to the purging stage. This occurs when all the gas escapes from the body, and whatever fluid is leftover leaks out into a pool of dark fluid surrounding the corpse. It is truly disgusting, as you can see in the video above. Interestingly, notes Stromberg, this dark fluid is really nutrient-rich, so could almost act like a fertiliser for the body farm grounds, except that it's also full of nitrogen, which kills off the plants underneath the body almost immediately. "But a year later, says Stromberg, "it'll become especially fertile."

The fourth stage, known as advanced decay, happens much more slowly than the first three stages. Now that most of the body's nutrients have been leeched out of the corpse, one of two things can happen to it. If the body is exposed to the constant heat of the Texan sun, the bacteria and insects won't be able to survive on it long enough to eat the flesh away, so the body will just gradually mummify on its own. If the corpse has been laid out in the shade, however, the bacteria and insects will continue eating it down to a skeleton.

What happens next? Well it involves a toothbrush, a horrific-smelling lab, and some really, really brave undergraduate interns. Watch Stromberg's video above to here more of the - quite literal - gory details.

We hope you were eating just now.

Be sure to check out Stromberg's feature about his time at the body farm over at Vox.