You're probably already aware of how artificial light can block our view of the stars at night, but a gorgeous new time-lapse video from photographer Sriram Murali reveals the effect like never before.

Those light pollution levels are based on what's called the Bortle scale, which measures the brightness of the night sky and how well the stars can be seen. It runs from 1 (excellent dark sky) to 9 (inner-city sky).

Earlier this year, an international study estimated that 60 percent of Europeans and 80 percent of North Americans now live in areas where they can't see the Milky Way at night. 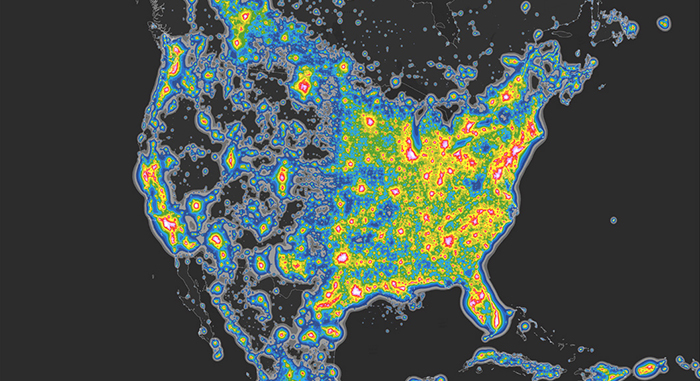 Light pollution in the US, 2016. Credit: World Atlas of Artificial Night Sky Brightness

And that's a problem, because the stars above don't just give us a pretty view for our evening's entertainment – there's evidence that the constant level of artificial, ambient light on Earth is messing with our natural circadian rhythms.

And not just in the big cities. As you can see from the latest maps, light pollution stretches way out into rural areas as well.

Researchers in the UK have previously spotted signs that this artificial light is confusing trees and plants too, leading certain flora to initiate spring early. Flowers that bloom early can have real knock-on effects on the natural food chain, so we're not just talking about a few extra weeks of leaves on trees.

Murali agrees that dark skies are worth preserving. "The night skies remind us of our place in the Universe," he explains. "That reminder [is] we are a tiny part of this cosmos ... a special connection with this remarkable world would make us much better beings – more thoughtful, inquisitive, empathetic, kind, and caring."

If you want more evidence of how our urban sprawl would look with the lights out, check out the Blackout City video of London below, from photographer Nicholas Buer. With the power turned off, the hidden stars suddenly become visible again.

The good news is that there are organisations, including the International Dark-Sky Association, that are working to combat the effects of light pollution and prevent it from spreading further – plus there are efforts in remote areas to preserve dark skies for the future.

This is an environmental problem we can solve, but only if we remember not to leave the lights on.