WATCH: This Freaky 'Devil Tree' in Ohio Burns From The Inside Out

At the end of last year, a truck driver in Ohio stumbled upon this eerie looking tree, which was blackened on the outside and filled with glowing, red-hot flames within. The Blair Witch Project-style footage has since gone viral, to the not-unexpected cries of "OMG it's the devil's work!" But trees burning from the inside-out like this one aren't actually that uncommon, and there's a scientific explanation for how they end up looking like some kind of gateway to Hell.

Although the cause of this tree fire wasn't officially investigated, this type of phenomenon is known to be caused by lightning strikes. So why does only the inside burn and not the trunk? It's due to the moisture content of the tree held just below the bark.

When a lightning bolt passes through a tree, the sappy interior is a better conductor than the wood, and it heats the sappy interior to temperatures close to boiling point. This internal pressure can cause the tree to explode, which may have happened to create the cracks in the trunk in this situation.

When conditions are dry, the fire can quickly spread, but if the outside of the tree is damp as a result of recent rain, the blaze can continue to smoulder from inside the hollowed-out trunk, sometimes for days at a time. Here's another example, uploaded to reddit a couple of years ago: 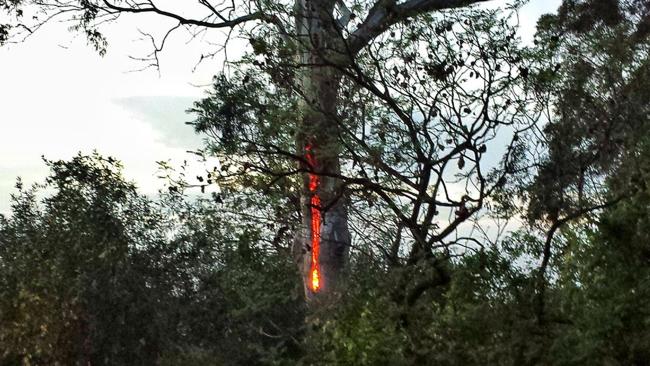 While we're setting things straight, contrary to what the majority of the media has reported, the footage wasn't captured by hikers, and smoke was actually present.

"I am a truck driver and was at a customer to pick up a load," the guy who filmed the video told Rumble. "When I first got there, there was no smoke but you could smell what smelled like campfire. I didn't think anything of it. I went into the customer ... and when I came out there was a lot of smoke."

There also weren't any dark forces involved causing the truck driver to fall over - it was just mud. "I slipped and fell twice, and on the second fall I must have accidentally stopped the video," he explained.

Regardless of the cause of the fire, I think we can all agree that it would be a pretty humbling thing to come across. All bow down to the power of nature.