We Finally Know How Naked Mole Rats Survive Without Oxygen, And It's Really Freaking Weird

Naked mole rats (Heterocephalus glaber) have never been the most conventional mammal - the scrotum-looking creatures are resistant to cancer, can survive almost 20 minutes without oxygen, and can barely feel pain.

But new research has revealed that they're even more bizarre than scientists could have ever imagined.

A new study has shown that when these strange creatures are deprived of oxygen, their metabolism behaves more like a plant than a mammal. Seriously, what the hell, nature?

Unlike all other known mammals, when the brain cells of naked mole rats are deprived of oxygen they do not run out of energy and die.

In fact, naked mole rats can survive for five hours at oxygen levels so low a human would die in minutes, and this latest study showed they can endure a ridiculous 18 minutes of total oxygen deprivation by slipping into a sort of vegetative state. Mice without oxygen die after around 20 seconds.

Previous studies have shown that naked mole rats conserve energy by slowing their movements, reducing their breathing rate, and dramatically slowing their pulse. They're the only mammals known to survive suffocation through this type of suspended animation.

But for a long time, scientists were stumped about how naked mole rats were able to survive these conditions on a cellular level without lasting damage - usually the lack of oxygen causes the build up of harmful metabolites and brain cells to die off.

Now, researchers think they have the answer.

Instead of sticking to a glucose-based system, which is dependent on oxygen, when a naked mole rat is deprived of oxygen, it switches its metabolism so that its brain cells start burning fructose for energy instead of glucose.

Fructose can be turned into energy anaerobically - which means it doesn't require the presence of oxygen to be broken down into cellular energy.

Until now, this anaerobic pathway was thought only to be used by plants.

"This is just the latest remarkable discovery about the naked mole-rat - a cold-blooded mammal that lives decades longer than other rodents, rarely gets cancer, and doesn't feel many types of pain," says lead researcher Thomas Park from the University of Illinois at Chicago.

The team showed that the mammals keep metabolising fructose in this state until oxygen becomes available, keeping their brain cells alive even without oxygen. At which point, they will perk up and begin moving as if nothing happened. Remarkably, there appears to be no lasting damage.

Scientists believe the naked mole rat adapted this way to survive in overcrowded and unventilated burrows - up to 100 naked mole rats are known to sleep together in mounds to keep warm. 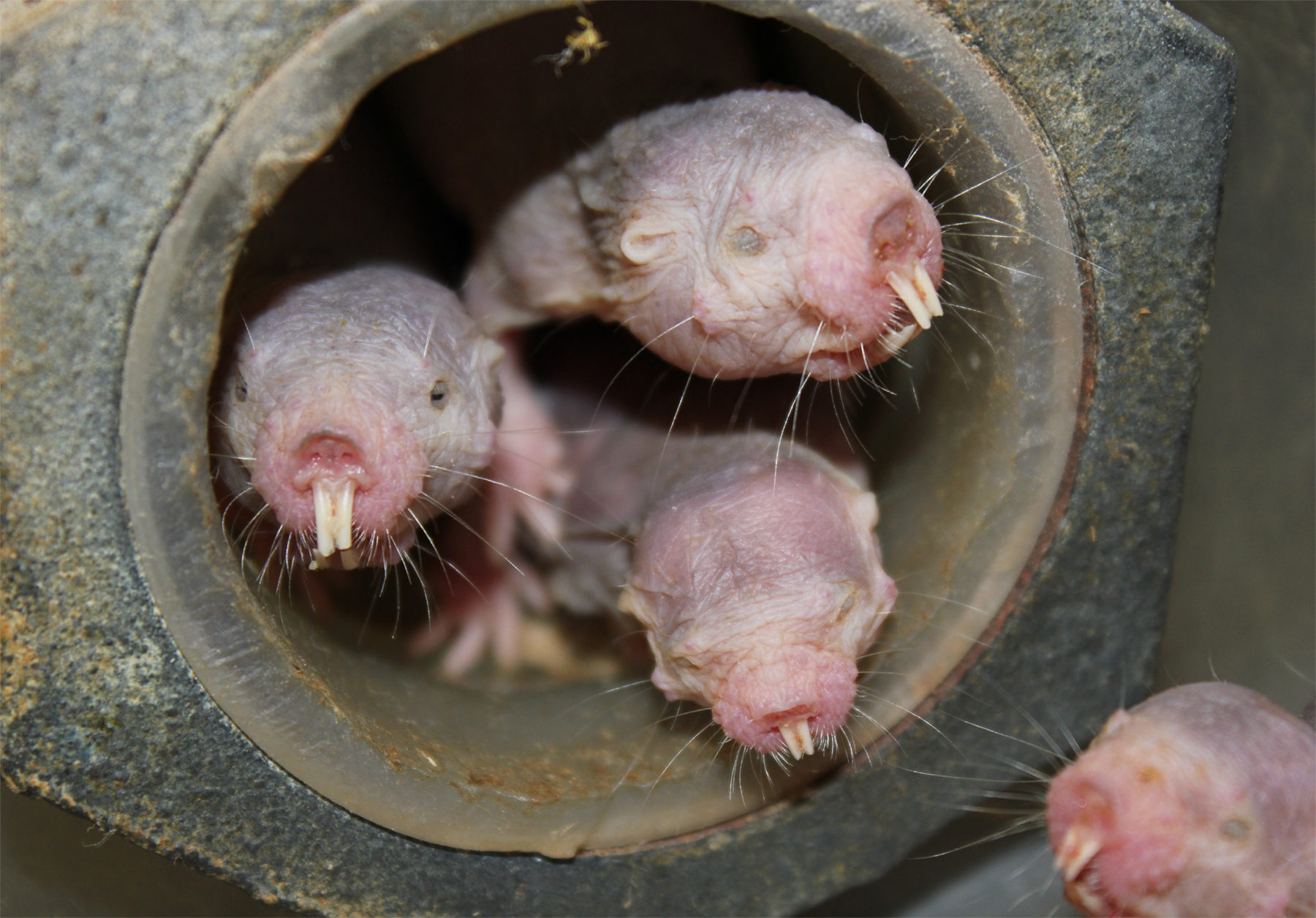 "The naked mole rat has simply rearranged some basic building-blocks of metabolism to make it super-tolerant to low oxygen conditions," says Park.

To figure this out, researchers exposed naked mole rats to conditions of low oxygen and found an increased amount of fructose in their bloodstreams.

Other mammals can metabolise fructose in their intestines, but the team showed that, in naked mole rats, fructose was also being funnelled into brain cells by fructose pumps that are only found in the intestine of other mammals.

To take things further, when fructose was supplied directly to the brains and hearts of naked mole rats and mice, these organs were able to survive using fructose as energy, even without the presence of oxygen. Under the same conditions, the hearts and brains of mice failed.

Surprisingly, the naked mole rat's heart performed just as well with fructose as with glucose, suggesting it is just as skilled with one type of metabolism as it is with the other.

The study is important not just because it reveals the true biology of these curious creatures. It also raises questions about whether human cells could survive without oxygen.

"Patients who suffer an infarction or stroke experience irreparable damage after just a few minutes of oxygen deprivation," says one of the researchers Gary Lewin from the Max Delbrück Center for Molecular Medicine in the Helmholtz Association.

"Theoretically, very few changes might be needed to adopt this unusual metabolism."

If human cells could rearrange their metabolism in this way, critical organs could be saved when a stroke or infarction occurs.

Naked mole rats have also recently exposed the secrets of how they're so impervious to pain, which scientists think could help them to develop better pain treatments in humans.

Strange foreskin rats, we salute you.