The Moon may look like a chunk of cold, dead rock floating in space, but there could be life in the old girl yet. Geologists have found hints of tectonic activity on the near side of the Moon that they believe is recent - and may even be ongoing today.

The presence of relatively fresh rocks and boulders reveals a system of ridges across the face of the Moon that suggests recent tectonic movement.

"There's this assumption that the Moon is long dead, but we keep finding that that's not the case," said planetary geologist Peter Schultz of Brown University. "From this paper it appears that the Moon may still be creaking and cracking - potentially in the present day - and we can see the evidence on these ridges."

We've known since the Apollo era that the Moon is still rumbly. Seismometers placed on the lunar surface by Apollo astronauts decades ago unexpectedly revealed weak moonquakes deep below the surface, and shallower tectonic quakes in the crust.

Geologists concluded that the deep moonquakes were the result of gravitational interactions with Earth, which places a lot of stress on the Moon.

The shallow moonquakes were a little harder to pin down. They resembled earthquakes in strength, but the Moon doesn't have tectonic plates like those that causes Earth to shudder, so the tremors defied easy explanation. Last year, however, scientists found one possibility: the tectonic quakes, they said, are caused by the Moon shrinking as it continues to cool 4.5 billion years after it formed.

Other new ridges, too, have been detected around lava-filled impact basins; however, those can be attributed to sagging associated with the weight of the lava. But this latest discovery doesn't quite fit with that.

"The distribution that we found here begs for a different explanation," Schultz said.

He and planetary geologist Adomas Valantinas of the University of Bern in Germany studied data taken from the Diviner instrument onboard NASA's Lunar Reconnaissance Orbiter, an instrument that measures the temperature of the lunar surface.

Because exposed bedrock and chunky surfaces retain heat more effectively than surfaces covered by regolith - dirt, dust and and rubble - this can be used to detect those surfaces during the lunar night.

"Exposed blocks on the surface have a relatively short lifetime because the regolith buildup is happening constantly," Schultz explained. "So when we see them, there needs to be some explanation for how and why they were exposed in certain locations." 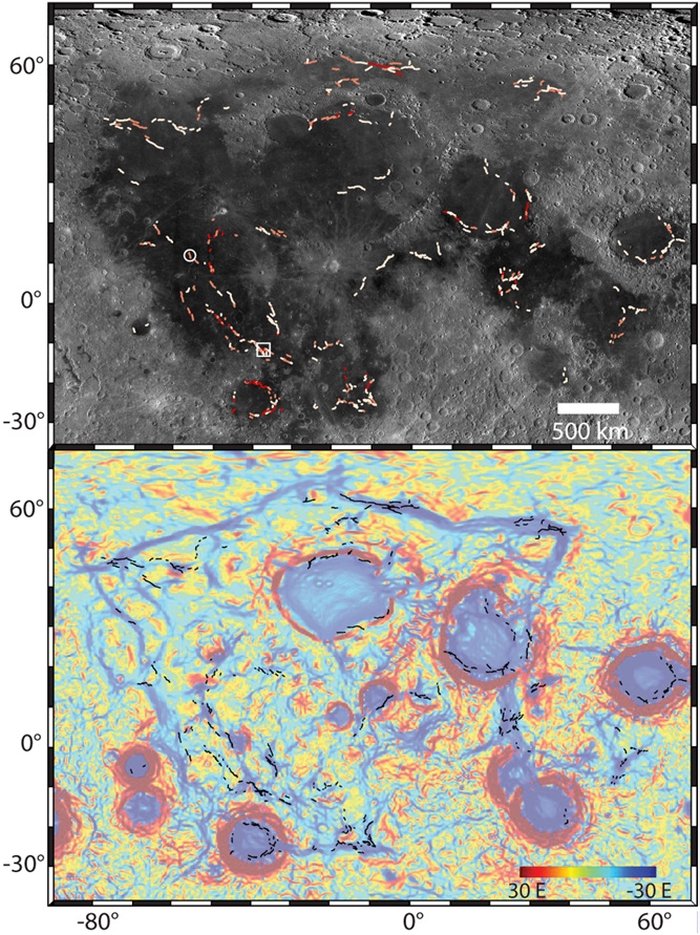 So, the team analysed data collected by the orbiting spacecraft when the near side of the Moon was shrouded in the 14 days of darkness of lunar night - and they identified over 500 patches of exposed bedrock that seemed to form a pattern across the lunar maria.

When the team mapped these patches out, they found that they matched almost exactly with deep, ancient cracks discovered in 2014.

"It's almost a one-to-one correlation," Schultz said. "That makes us think that what we're seeing is an ongoing process driven by things happening in the Moon's interior."

Once upon a time, these cracks had been fed with magma from deep within the lunar interior. And their distribution, that 2014 paper found, was consistent with thermal stresses, differential cooling and magmatic activity.

But more recent work found that the distribution of fault scarps on the lunar near side is inconsistent with what we'd expect from global cooling. And tidal stress from Earth would be too weak to cause the observed geology, the researchers wrote in their paper.

The new findings suggest that the ridges are still surging upward. But the combination of the ridges with the magma-filled cracks presents a possible explanation: the South Pole-Aitken Basin.

This is a colossal impact crater on the far side of the Moon. At 2,500 kilometres (1,550 miles) across, it covers a quarter of the lunar surface, and is one of the biggest known impact craters in the Solar System. It's possible, the team proposes, that this impact shook the Moon to its core.

This could have produced a system of cracks on the near side, which then filled with magma. The rising ridges are then, in this model, the ongoing response to that partially Moon-shattering event long ago.

"Giant impacts have long lasting effects," Schultz said. "The Moon has a long memory. What we're seeing on the surface today is testimony to its long memory and secrets it still holds."