The Speed of Sound on Mars Is Strangely Different, Scientists Reveal

Scientists have confirmed the speed of sound on Mars, using equipment on the Perseverance rover to study the red planet's atmosphere, which is very different to Earth's.

What they discovered could have some strange consequences for communication between future Martians.

The findings suggest that trying to talk in Mars' atmosphere might produce a weird effect, since higher-pitched sound seems to travel faster than bass notes. Not that we'd try, since Mars' atmosphere is unbreathable, but it's certainly fun to think about!

From a science perspective, the findings, announced at the 53rd Lunar and Planetary Science Conference by planetary scientist Baptiste Chide of the Los Alamos National Laboratory, reveal high temperature fluctuations at the surface of Mars that warrant further investigation.

The speed of sound is not a universal constant. It can change, depending on the density and temperature of the medium through which it travels; the denser the medium, the faster it goes.

Mars' atmosphere is a lot more tenuous than Earth's, around 0.020 kg/m3, compared to about 1.2 kg/m3 for Earth. That alone means that sound would propagate differently on the red planet.

But the layer of the atmosphere just above the surface, known as the Planetary Boundary Layer, has added complications: During the day, the warming of the surface generates convective updrafts that create strong turbulence.

Conventional instruments for testing surface thermal gradients are highly accurate, but can suffer from various interference effects. Fortunately, Perseverance has something unique: microphones that can allow us to hear the sounds of Mars, and a laser that can trigger a perfectly timed noise.

The SuperCam microphone was included to record acoustic pressure fluctuations from the rover's laser-induced breakdown spectroscopy instrument as it ablates rock and soil samples at the Martian surface. 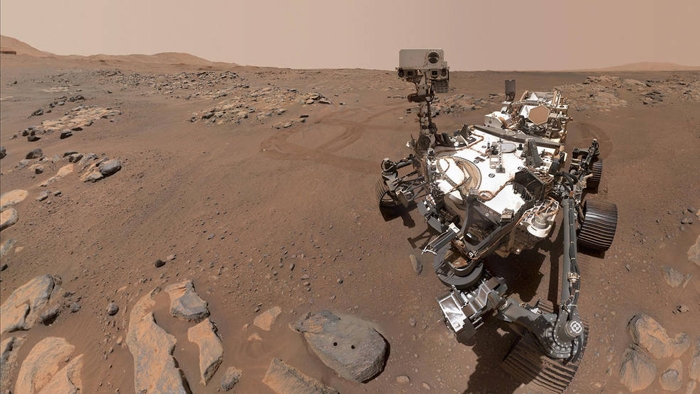 This came with an excellent benefit, as it turns out. Chide and his team measured the time between the laser firing and the sound reaching the SuperCam microphone at 2.1 meters altitude, to measure the speed of sound at the surface.

"The speed of sound retrieved by this technique is computed over the entire acoustic propagation path, which goes from the ground to the height of the microphone," the researchers write in their conference paper.

"Therefore, at any given wavelength it is convoluted by the variations of temperature and wind speed and direction along this path."

The results back up predictions made using what we know of the Martian atmosphere, confirming that sounds propagate through the atmosphere near the surface at roughly 240 meters per second.

However, the quirk of Mars' shifting soundscape is something completely out of the blue, with conditions on Mars leading to a quirk not seen anywhere else.

"Due to the unique properties of the carbon dioxide molecules at low pressure, Mars is the only terrestrial-planet atmosphere in the Solar System experiencing a change in speed of sound right in the middle of the audible bandwidth (20 Hertz to 20,000 Hertz)," the researchers write.

At frequencies above 240 Hertz, the collision-activated vibrational modes of carbon dioxide molecules do not have enough time to relax, or return to their original state. The result of this is that sound travels more than 10 meters per second faster at higher frequencies than it does at low ones.

This could lead to what the researchers call a "unique listening experience" on Mars, with higher-pitched sounds arriving sooner to the listener than lower ones.

Given that any human astronauts traveling to Mars anytime soon will need to be wearing pressurized spacesuits with comms equipment, or living in pressurized habitat modules, this is unlikely to pose an immediate problem – but it could be a fun concept for science-fiction writers to tinker with.

Because the speed of sound changes due to temperature fluctuations, the team was also able to use the microphone to measure large and rapid temperature changes on the Martian surface that other sensors had not been able to detect. This data can help fill in some of the blanks on Mars' rapidly changing planetary boundary layer.

The team plans to continue using SuperCam microphone data to observe how things like daily and seasonal variations might affect the speed of sound on Mars. They also plan to compare acoustic temperature readings to readings from other instruments to try to figure out the large fluctuations.