There Are Snowcapped Mountains on Pluto, And We May Finally Know Why

We can thank NASA's New Horizons spacecraft for opening our eyes up to Pluto's complexity. On 14 July 2015, the spacecraft came within 12,500 km (7,800 mi) of the dwarf planet. During the flyby, New Horizons was able to characterize Pluto's atmosphere and its surface.

Among the things New Horizons saw was a region of snowcapped mountains.

Here on Earth, the higher you go, the colder it gets, which explains our snowcapped mountains.

But on Pluto, there's a temperature inversion, meaning that it's the reverse of Earth: the higher you go, the warmer it gets.

It's because of solar radiation. The average atmospheric temperature at altitude is tens of degrees higher than its surface.

So why is there frost?

A team of researchers, led by members from the CNRS (Centre National de la Recherche Scientifique, or French National Center for Scientific Research), tackled the question in a new study.

The title is "Equatorial mountains on Pluto are covered by methane frosts resulting from a unique atmospheric process." The lead author is Tanguy Bertand, who is currently a NASA Postdoctoral Fellow at NASA Ames Research Center. The study is published in Nature Communications. 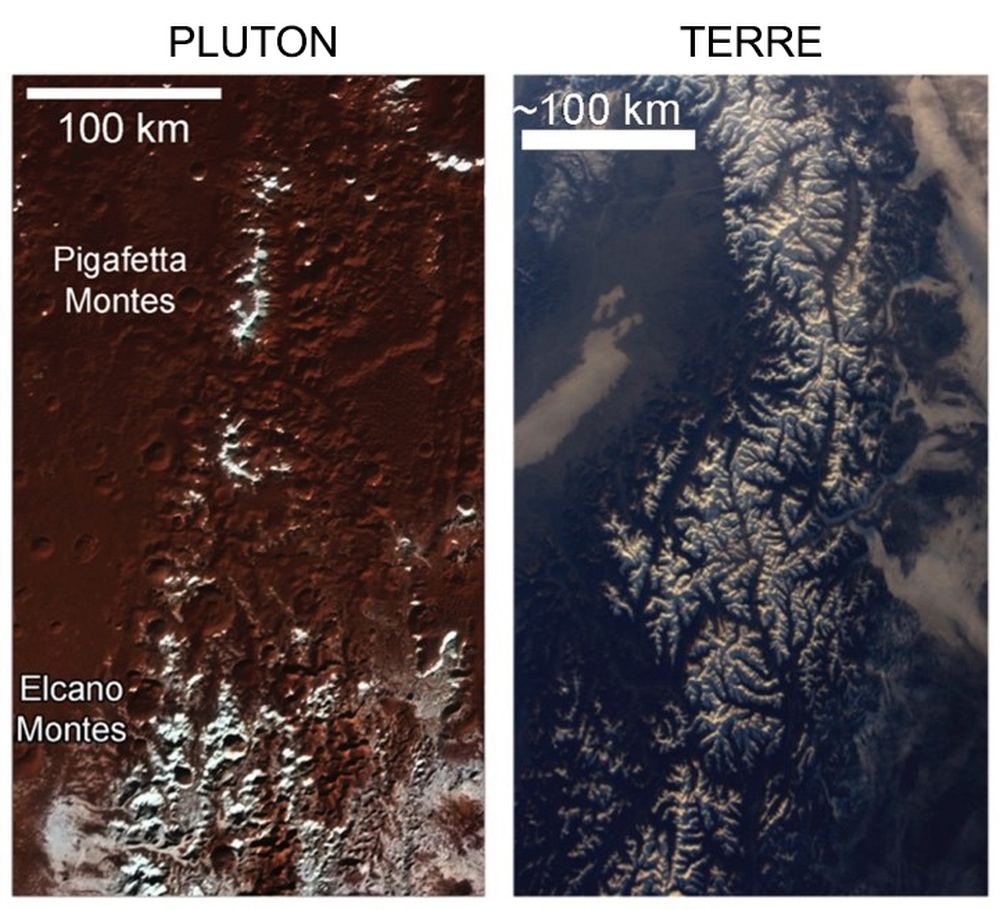 Pluto's snow is not like Earth's snow; it's frozen methane, not frozen water.

But Pluto's a frigid world with a tenuous atmosphere, and there's a scant amount of methane in its very thin atmosphere. How did it form as snow on the tops of mountains?

On Earth, temperature decreases with altitude due to adiabatic cooling. As air moves upward along the slope of a mountain, it expands, which leads to cooling.

The reverse is true as air descends: the air gets warmer. When moist air is rising, and when it cools enough, it condenses and falls as snow. It's a well-understood phenomenon here on Earth, but it can't explain Pluto's snow.

By working with the climate model, the researchers determined that the dynamics of Pluto's atmosphere concentrates the methane at higher altitudes. Only at the tops of mountains is there enough methane to form snow. At lower altitudes, there simply isn't enough methane.

Since Pluto doesn't have a thick, insulating atmosphere like Earth, the dwarf planet is warmer at higher altitudes due to solar radiation, as the heat is absorbed by the methane in the atmosphere.

Pluto's atmosphere is too thin to heat the planet's surface, so when there's no frozen nitrogen on the surface, there's a "local radiative balance." That balance is independent of altitude and it's colder than the atmosphere above it.

As a consequence, the air near the surface is cooled, becomes denser, and wants to flow downslope all the time. Climate simulations by other researchers show that this mechanism is present all over Pluto, and at all times of the day.

The result is that Pluto is dominated by downslope winds. That's why its snow formation is so puzzling. It's completely different than Earth, where air cools as it rises, and deposits its moisture as snow on mountains.

The team of researchers found that Pluto's atmosphere circulates in such a way that methane is concentrated at higher altitudes. That circulation is seasonal, and driven by sublimation on the surface.

The authors refer to this as "sublimation-induced circulation cells." As the methane becomes more concentrated, it reaches a saturation point and falls as snow on the surface of the mountains.

There's a feedback loop involved too. As methane snow forms on the mountains, it increases the albedo, leading to more cooling. With more cooling comes more methane snow.

"Overall, the formation of CH4 frost on top of Pluto's mountains appears to be driven by a process completely different from the one forming snow-capped mountains on the Earth, according to our model," the team writes in the conclusion of their paper.

"It is remarkable that two phenomena and two materials that are so dissimilar could produce the same landscape when seen at similar resolution."

This is just one more example of Pluto's complexity. Prior to the New Horizons flyby of the dwarf planet, we had no idea that the surface, atmosphere, and climate were so complex. Scientists are still working with all the data from the mission, so who knows what is still waiting to be discovered.

There's also some talk of another mission. New Horizons only performed a flyby of the ice dwarf, so its best data is restricted to one side of the distant world.

Planetary scientist Alan Stern was the Principal Investigator for the New Horizons mission and he thinks an orbiter mission to Pluto is the next step. A lander could also be part of that mission.