Survey: These Are The Biggest Fears of Americans in 2018

Humans are a scared bunch. Everything from spiders, to blood and guts can set us off, as Halloween every year reminds us.

But in 2018 what are Americans most afraid of? Well, move over spiders and snakes – a new survey suggests we're way more scared of the bigger picture issues like government corruption, the environment, and illness.

Every year Chapman University in California surveys a group of Americans to find out their fears.

This year, 1,190 people from across the US were asked 94 different questions relating to crime, the government, environment, personal anxieties and many more.

And the results are a little telling of where we are as a society right now. 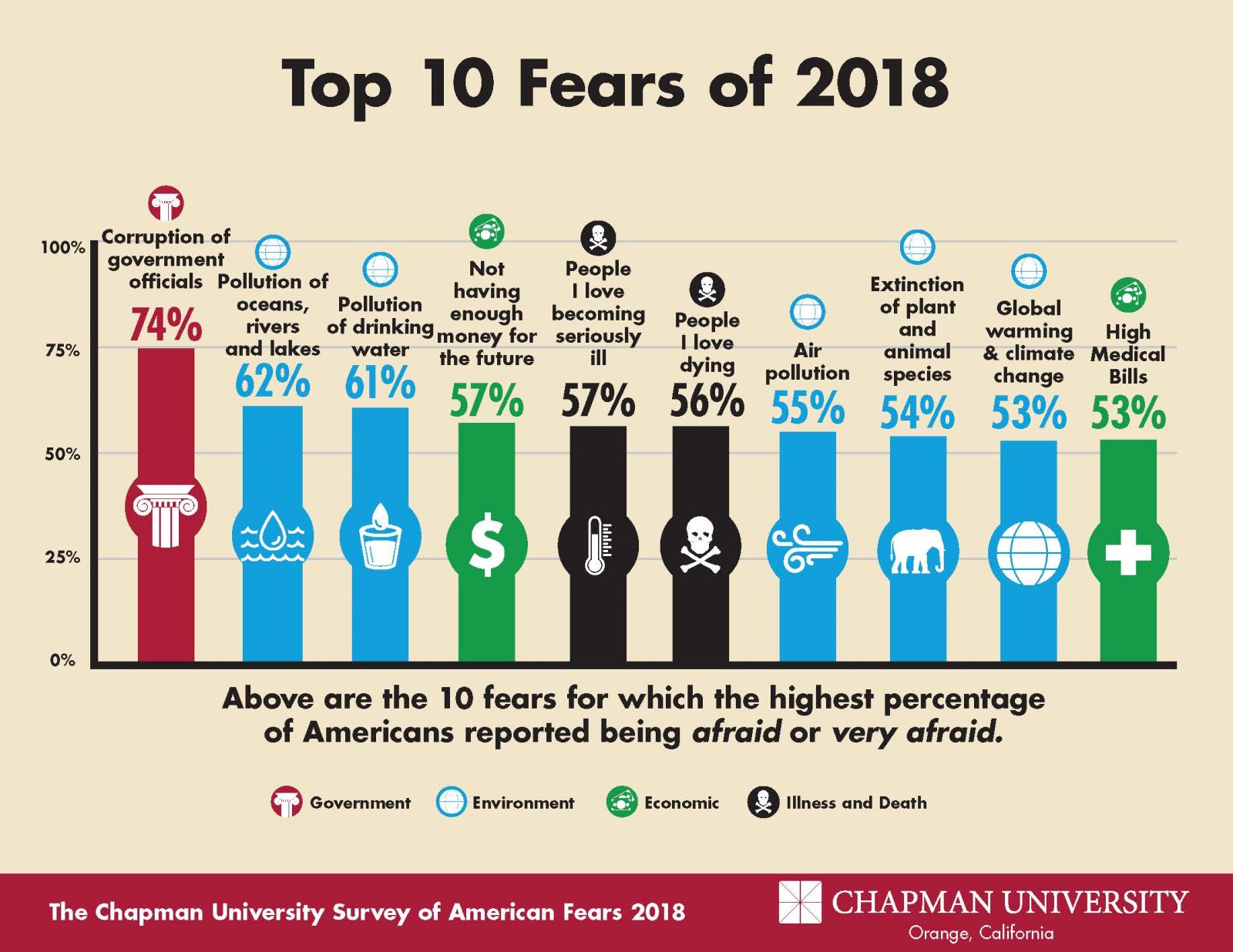 As you can see in the graph above, the number one fear – with 73.6 percent of respondents reporting they were either afraid or very afraid – was government corruption.

"The extent to which Americans are afraid, in general, also appears to be on the rise," explain the researchers in a blog post.

In 2016, only two of the top ten fears scared more than 40 percent of Americans.

"By 2018 all the top ten fears were held by more than half of Americans."

Our second and third collectively biggest fears are pollution of water – either drinking water and oceans, rivers and lakes.

Fourth was worries about money, and both five and six were anxieties about a loved one becoming ill or dying.

And last, at number 10, was high medical bills, with 52.9 percent of American's sharing that concern.

This beat out things like being unemployed, nuclear accidents, snakes, clowns, and even Satan himself.

"A striking difference between 2016 and 2017-2018 has to do with the environment," explains the researchers in a blog post.

"Since Trump's election, Americans' are increasing fearful of pollution, global warming and other environmental disasters. Not a single environmental concern made the top 10 list in 2016."

Although that might be because things seem incredibly dire right now - capitalising on this momentum is important.

As we've explained in the past, the best way we can effectively limit our emissions, and fix pollution is by making sure politicians change laws and policies.

If you want to see the entire list of fears and how they were rated, you can check it out here and you can see the full methodology here.