What Are NFTs, or Non-Fungible Tokens?

Hashmask 15753, a virtual artwork with an NFT. (Public Domain)

A non-fungible token (NFT) is a digital signature defining ownership of a specific example of digital work.

Produced using blockchain technology, it functions like a token of bitcoin currency, in that NFTs are items in a non-centralized, cryptographically-encoded ledger that keeps a record of possession and transfer.

Where bitcoins could theoretically be swapped like-for-like (just as any old $20 bill can be swapped for another $20 bill), non-fungible tokens are units of information representing a specific item. That makes them more like boarding passes than bank notes, limiting their fungibility, or ability to be interchanged with other goods or assets.

In turn, this makes them perfect for recording the ownership of an item that could otherwise easily be copied and shared – such as online graphic art, music, and even objects in computer games.

Okay, what's the point of owning an NFT then?

The goal of creating NFTs was to add an element of scarcity to what is effectively a limitless resource.

There is just one Mona Lisa. Owning it means you can hang it in in your dining room, give it to a museum for safe-keeping, or sell it to the highest bidder. A photograph of the Mona Lisa in your travel diary clearly isn't the same thing.

But if you have a picture of the retro cartoon Nyan Cat blazing a rainbow trail across your computer screen, your friend can make an exact copy and display it on their own desktop. Asking which is the real Nyan Cat is meaningless. 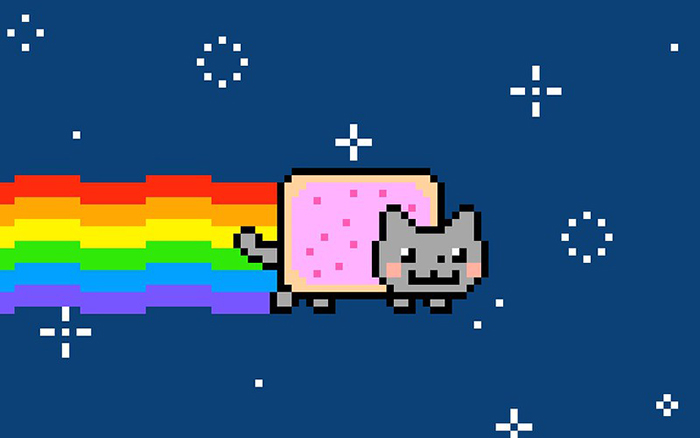 Even if your friend pays to download a copy of the image from a website, as they might for a music album, the result is still just an owned duplicate.

By contrast, NFTs can't be duplicated. Even if thousands of people have a copy of the piece it represents, the NFT-linked ledger item is qualified as the real deal. The only way to own it is to purchase that NFT from the previous owner and use blockchain to record the transfer.

So people are paying for NFTs using actual money?

Like diamonds or gold or Funko Pop Vinyls, for as long as there's a person willing to buy a specific NFT, the token has an intrinsic value.

In 2017, a pair of 'creative technologists' operating under the project name Larva Labs began a release of collectible digital characters called CryptoPunks. Each unique character head available for purchase has a proof of ownership in the form of an NFT.

In spite of a sales price averaging just over US$21,000 per head, thousands have been sold, making the total value of all sales of the Punks nearly US$200 million dollars.

Since then, the NFT market has grown significantly and reached new peaks in early 2021, with music artists like Kings of Leon and Grimes selling tokens for their music and art, and the auction house Christie's selling a collage NFT for the first time for an astonishing US$69,346,250.