What Is The Higgs Boson?

To understand the Higgs boson, we really need to talk about the Higgs field first. This field gives certain fundamental particles their mass, while also separating two of the four fundamental forces of nature from each other.

The field's existence was first theorized in the early 1960s, with physicists considering the consequences of a hypothetical field that would explain how electromagnetism and the weak force became separated, and why some force-carrying (or gauge) particles have mass (like W and Z bosons) while others (like photons) don't.

British physicist Peter Higgs was one of a number of researchers working on this model. His name has since become synonymous with the field, its particle, and its mechanism of action.

What is the Higgs boson, then?

As with all quantum fields, the Higgs field gives rise to its own kind of fundamental particle, the Higgs boson. It's a relatively heavy, uncharged, highly unstable boson (force-carrying particle, one with zero spin) that exists for a blink before breaking down into any few of a variety of other particles.

In 2012, just such a particle was detected by two of the Large Hadron Collider's detectors, officially leading to the Higgs boson's inclusion as part of the Standard Model and providing strong evidence for the Higgs mechanism.

What gives particles their mass?

In everyday terms, we experience mass as a resistance to movement. Things with a lot of mass are hard to get moving; once they're in motion, they're hard to stop.

Albert Einstein's formulation of special relativity gives us another way to view mass – it's an expression of an object's energy.

When sitting still, an object has a mass that's equal to its energy divided by the square of the speed of light - a twist on the familiar formula E=mc2. Make an object move, especially at near light speed, and it'll gain energy which acts as mass.

Atoms get most of their mass from the energetic buzz of particles called quarks zipping around inside their nuclei, bound together by the strong force. 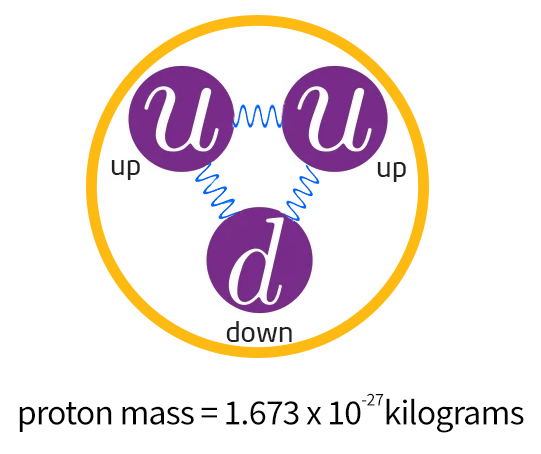 Yet even on their own, quarks have mass. As do the surrounding electrons. With nothing 'buzzing' inside them, some kind of activity is needed to account for the energy that would equal their mass while at rest.

What's more, in the mid-20th century, physicists discovered previous models describing gauge bosons weren't matching observations; short-range particles like the weak force's W and Z bosons were 80 times more massive than an entire proton, whereas the far-reaching photon of the electromagnetic field had no mass at all.

Physicists were desperate to find a reason for these differences in heft, and why the two fields were so distinct.

How does the Higgs field give fundamental particles their mass?

At the insanely high temperatures in the moments after the Big Bang, the fields of electromagnetism and the weak nuclear force would have been virtually identical to one another.

As the Universe expanded and cooled, the two fields would have become distinct – one operating with heavy bosons that acted over the short distance of a nucleus, the other with bosons light enough to reach across vast stretches of space.

Similar explanations for this split – and the difference in masses – came from several groups of physicists around the world. History recognizes the proposal made by Higgs and colleagues François Englert and Robert Brout in 1964, based on a new type of quantum field that was active everywhere, even throughout empty space.

Having a field with a non-zero value in every corner of the Universe would upset a fundamental balance in quantum mechanics that in theory should generate a kind of particle already ruled out by experiments.

But Higgs, Englert, and Brout showed that if this hypothetical field was linked with the field responsible for the weak force, the troublesome particle nobody had seen would be gobbled up, leaving behind some heavyweight W and Z bosons and a relatively heavy, spin-less, uncharged 'Higgs' boson (that would quickly crumble apart).

Think of the Higgs field as a candy shop, with bosons reluctant to be rushed as they dine on chocolate, only to leave a bunch of short-lived 'Higgs wrappers' in their wake.

It soon became clear that this same process would work for just about any quantum field; the Higgs field explains the masses of a range of other fundamental particles – such as quarks and electrons – which all resist being pushed as they take a moment to treat their sweet tooth.