Why Do Our Veins Often Look Blue if Blood Is Actually Red?

Blood is red, and a surgeon will tell you our veins too are red, they only look blue when we see them through our skin. But why?

The answer depends on a number of things, including how your eyes perceive colour, how light behaves when it contacts your body, and the special properties of blood.

Light travels in peaks and troughs. And the distance between each trough is called a wavelength. Different colours of light have waves of different lengths.

We see something as a particular colour when light of that colour hits our eyes –either directly from a light source or reflected from a surface.

To understand what colour our veins appear, we need to think about what happens to different wavelengths of light when they hit our skin, how far they can travel through our skin, and what happens when they get to our veins.

The light that hits our skin during the day is basically white, which is a mixture of all the visible wavelengths. But to explain why our veins look blue, we will look at just the red and blue ends of the spectrum.

Red light has a long wavelength – and this means it is less likely to be deflected by materials and can more easily travel through. Red light can travel pretty well through the skin and body tissues, reaching up to 5-10mm below the skin, which is where many veins are.

When it gets to the veins, the red light is absorbed by the haemoglobin (the protein that makes our blood red). You can demonstrate this to yourself.

If you shine a red light on your arm, you will see some red light reflected back, and dark lines where the veins are, as the red light is absorbed by the haemoglobin.

This phenomenon is actually used to help medical personnel find veins to take blood – by shining red, and sometimes infrared (which is an even longer wavelength) light on the arm.

Blue light has a short wavelength (about 475 nanometres), and is scattered or deflected much more easily than red light. Because it's easily scattered it doesn't penetrate so far into the skin (only a fraction of a millimetre). When blue light hits the skin, it's mostly deflected back.

If you shine a blue light on your skin, what you see is basically blue skin, and veins are hard to find. You may have seen blue light used in spaces such as public bathrooms to discourage intravenous drug use.

So, now imagine the red light and the blue light shining on your skin at once, as happens when you are under white light. You will have a mixture of red, blue and other colours reflected back where there are no veins.

Where there are veins, you will see relatively less red, and relatively more blue compared to the surrounding skin.

This means your veins will appear blue compared to the rest of your skin. 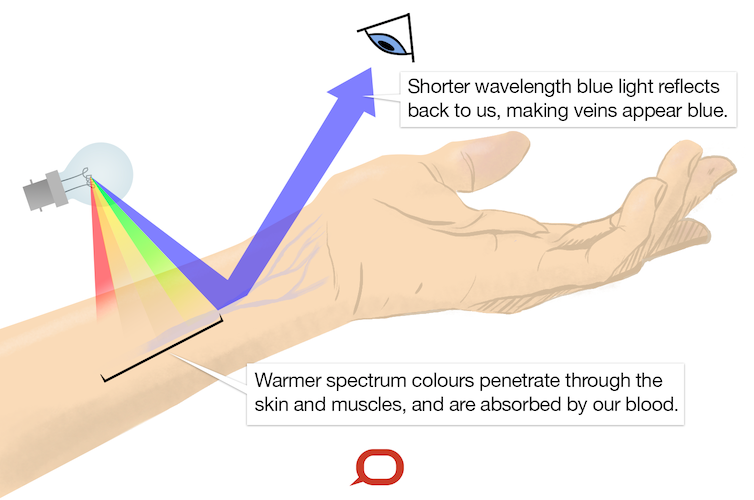 Interestingly, the effect varies depending on how deep the vein is, and also on how thick the vein is. Very narrow veins close to the surface, such as the capillary bed, will not appear blue.

Blue veins appear more prominent in very pale skinned people, and this may have given rise to the expression "blue blood" for European nobility in the 19th century.

These people were untanned from manual labour, and so their veins appeared blue under the skin.

Answering the question: I've always wondered why our veins are blue, when blood is red? - Alexandra, 28, Melbourne