In a remarkable study, researchers report what they say is the first documented case in medical literature of a silicone breast implant altering a bullet's trajectory and most likely saving a woman's life.

This horrific but ultimately non-fatal incident took place in Ontario, Canada, and the events of the evening are the subject of an ongoing investigation, with the shooter remaining unidentified, and the firearm used in the episode never having been recovered.

What is certain, though, is that a 30-year-old woman with breast implants sustained severe chest trauma after being struck by a bullet in public at night, with the projectile hitting her suddenly and without warning.

"The patient reported walking down [the] street and feeling heat and pain in her left chest, looking down and seeing blood," a research team led by plastic surgeon Giancarlo McEvenue explains in a case note.

After being transferred to a trauma centre, the woman was in a stable condition, with no additional injuries except for a single entry wound in the upper part of her left breast.

Examination of the wound revealed thermal injury surrounding the bullet hole on the left breast, suggesting close proximity to the discharging firearm, and a hard, bullet-like mass could be felt under the woman's skin on the other side of her body, lodged behind her right breast.

X-rays confirmed this mass was the bullet still inside the patient's body, in the right lateral thoracic wall, while also showing a fractured rib – clues to the bullet's trajectory through the body, the researchers say, entering the left breast and passing through to the right thoracic wall, where it was eventually stopped.

CT scans revealed pulmonary contusion (damage to lung tissue) but no intrathoracic injury, although signs of debris and air indicated both breast implants had been struck by the bullet. 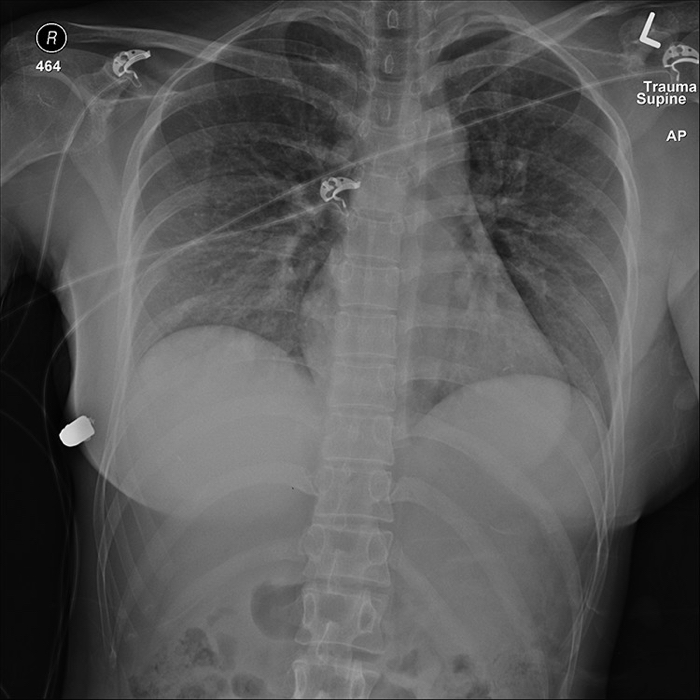 The surgeons removed both damaged implants, and extracted the projectile, which was given to police, and identified as a copper-jacketed 0.40 calibre bullet.

After the successful operation, the woman's medical team used CT imaging in conjunction with the clinical evidence to reconstruct how the bullet passed through the patient's body and her breast implants.

According to the researchers, the bullet was on course to pass directly through the chest wall and might have struck the woman's heart, had it not been for a deflection in the projectile's trajectory due to the presence of the left implant.

"Based on trajectory of bullet entry clinically and evaluation radiologically, the only source of bullet deflection of the bullet is the left breast implant," the authors write.

"This implant overlies the heart and intrathoracic cavity and therefore likely saved the women's life."

The researchers suggest deflection occurred within the implant likely at the point when the bullet pressed against and ultimately ruptured the implant's membrane.

While the hypothetical role of breast implants slowing down bullet velocity has been investigated before, the researchers say their patient's case is the first showing multiple lines of evidence that suggest deflection can also occur.

"Our study adds to this knowledge by using high-resolution CT technology to analyse bullet trajectory in an actual patient case," the authors write.

"This trajectory change could only have been due to the bullet hitting the implant in our patient's case, as the bullet did not hit bone on the left side (as evidenced by lack of left-sided fracture and a bullet that retained enough energy to cause right-sided fractures)."

Although reported cases like this might be rare, the team found at least two other cases in medical literature where ruptured breast implants are thought to have played a role in saving patients' lives after they were stuck by bullets.

"The unfortunate story has a happy ending in that the patient only suffered minor injuries and made a complete recovery," McEvenue says.

The findings are reported in Plastic Surgery Case Studies.