Researchers in the US have captured the first images of the exact moment when a mammal's egg is fertilised to show that, in response, it releases billions of zinc atoms that create tiny 'zinc sparks' at the point of conception.

The team, from Northwestern University, invented a new fluorescent sensor that is able to track the movements of zinc in live cells. This allowed them to take an unprecedented view of an egg's zinc-storage capabilities, and found some 8,000 zinc compartments, each one containing around one million zinc atoms. They were able to watch as, at the point of conception, these atoms were simultaneously released in a display that looks just like tiny fireworks, and lasts about two hours after fertilisation.

The find, which they've published in the journal Nature Chemistry, could help improve IVF treatments, as the researchers believe they can now offer a new way of identifying the best quality eggs.

"The amount of zinc released by an egg could be a great marker for identifying a high-quality fertilised egg, something we can't do now," said one of the team, ovarian biology expert, Teresa Woodruff, in the release. "If we can identify the best eggs, fewer embryos would need to be transferred during fertility treatments. Our findings will help move us toward this goal."

The team also used high-energy X-ray imaging techniques made available by the Advanced Photon Source Synchrotron, housed at the Argonne National Laboratory in the US, to pin-point exactly where the zinc atoms were positioned at any given moment both in two and three dimensions.

"On cue, at the time of fertilisation, we see the egg release thousands of packages, each dumping a million zinc atoms, and then it's quiet. Then there is another burst of zinc release," said co-author, Thomas O'Halloran, in the release. "Each egg has four or five of these periodic sparks. It is beautiful to see, orchestrated much like a symphony. We knew zinc was released by the egg in huge amounts, but we had no idea how the egg did this."

So why do fertilised mammal eggs release so much zinc anyway? According to Jennifer Viegas at Discovery News, the mineral plays a vital role in controlling the 'decision'  the egg makes to grow into an embryo - a process which sounds simple because it's so familiar to us, but it's an incredibly complex one.

"The egg first has to stockpile zinc and then must release some of the zinc to successfully navigate maturation, fertilization and the start of embryogenesis," said O'Halloran. "But exactly how much zinc is involved in this remarkable process and where is it in the cell? We needed data to better understand the molecular mechanisms at work as an egg becomes a new organism."

The researchers are now looking at practical applications for their findings, such as how to use zinc sparks to identify egg quality, which could lead to more reliable fertility treatments. 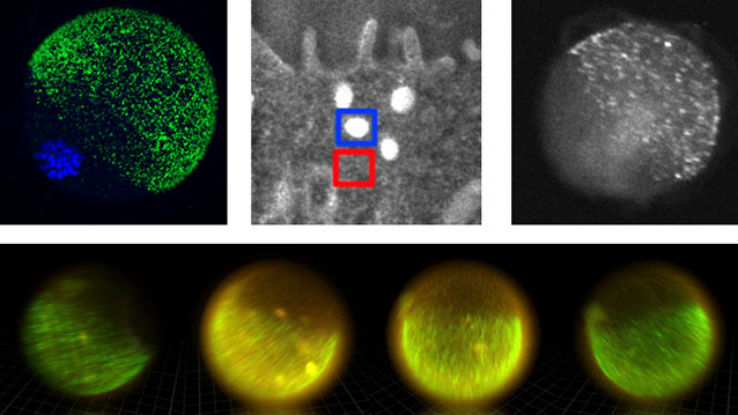 Bottom images: Release of thousands of these packages results in the striking event called the zinc spark that is a hallmark of fertilization in mammals. In the images shown, bright fluorescent signal coming from the egg is a result of the release of groups of zinc-rich packages from the egg to form a zinc spark.