2017 Is One of The Hottest Years on Record, And This Time There's No Excuse

Here we go again. According to the latest statement on the global climate, it's likely we've just lived through another one of the hottest years on record.

In fact, it looks like 2017 is going to be the warmest year without an El Niño we've ever experienced, with a plethora of extreme weather events across the globe to round out the fun.

As 2017 rapidly draws to a close, a provisional statement from the World Meteorological Organization (WMO) has been released today at the latest United Nations climate change summit COP23 in Bonn, Germany.

According to the statement, from January to September this year the average global temperatures were approximately 1.1°C above the pre-industrial era, putting us uncomfortably close to the famous Paris Agreement goal of 1.5°C.

In parts of southern Europe and the African continent, this year brought record-high temperatures, made all the more remarkable by the fact that we didn't have the temperature-boosting influence of the El Niño cycle.

As experts have noted, the last two years, both record-breaking in terms of global temperatures, were particularly sweltering thanks to an exceptionally strong El Niño - the cyclical shift that brings warmer weather across the Pacific Ocean. 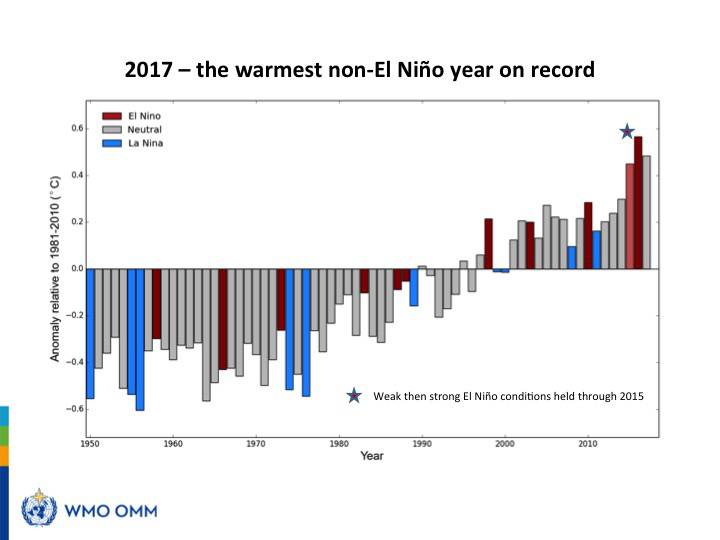 So, even though 2017 has not broken the overall temperature records of last year, it's now become the hottest non-El Niño year, closing off 2013-2017 as the warmest five-year period on record.

Of course, none of this news is particularly shocking to climate scientists, who have been observing the upwards trend in global temperatures for a while now, and have a solid explanation for what's going on.

"The past three years have all been in the top three years in terms of temperature records. This is part of a long-term warming trend," said Petteri Taalas, Secretary-General of the WMO.

Apart from ever-warming temperatures, this year the world also experienced some unnerving weather extremes, some of them record-breaking in their own right.

For example, the North Atlantic had a highly active tropical cyclone season, and three major high-impact hurricanes made landfall in the US in quick succession. At 1,539 millimetres, Hurricane Harvey's rainfall and flooding has made history as the largest-ever recorded seven-day rainfall for a single event in the mainland United States.

Experts have acknowledged that the relationship between climate change and these tropical storms is complicated, but the WMO team has found that it is likely human-induced climate change could be making rainfall rates more intense.

Devastating flooding also affected parts of the Indian subcontinent, especially eastern Nepal and northern Bangladesh in mid-August. Meanwhile Kenya experienced such a severe drought it was declared a national disaster.

"We have witnessed extraordinary weather, including temperatures topping 50 degrees Celsius in Asia, record-breaking hurricanes in rapid succession in the Caribbean and Atlantic reaching as far as Ireland, devastating monsoon flooding affecting many millions of people and a relentless drought in East Africa," said Taalas.

"Many of these events - and detailed scientific studies will determine exactly how many - bear the tell-tale sign of climate change caused by increased greenhouse gas concentrations from human activities."

More than just a laundry list of bad weather events, the latest climate statement is one of the documents decision makers from around the world will be considering at the COP23 summit.

The good news is that change is definitely in the air, as the world is finally banding together to try and alleviate the worst of what climate change will bring.

"There is unprecedented and very welcome momentum among governments, but also cities, states, territories, regions, business and civil society," said Patricia Espinosa, Executive Secretary of UN Climate Change who are hosting the summit.

The organisers are hoping that COP23 could very well serve as a "launch pad" for fast-forwarding ambitious planet-saving efforts across the board. And given the recent news that even the most optimistic goal of the Paris Agreement is still within our reach, we are feeling pretty hopeful, too.

After all, the stakes are incredibly high - we only have this one planet to live on.

"These findings underline the rising risks to people, economies and the very fabric of life on Earth if we fail to get on track with the aims and ambitions of the Paris Agreement," said Espinosa.