A rendering of the solar farm. (Sun Cable)
TECH

A major renewable energy project in Australia billed as the world's largest solar farm in development has had its proposed location revealed.

The AUD$20 billion facility – the heart of an ambitious electricity network called the Australia–ASEAN Power Link – will be built at a remote cattle station in the Northern Territory, roughly halfway between Darwin and Alice Springs.

The gargantuan 10-gigawatt array – spread out across some 20,000 football fields' worth of photovoltaic panels – might be situated close to the heart of the Australian outback, but the energy reaped from the plant will ultimately be transported far, far away from the sunburnt country.

That's because the Power Link doesn't just involve building the world's largest solar farm, which will be easily visible from space. The project also anticipates construction of what will be the world's longest submarine power cable, which will export electricity all the way from outback Australia to Singapore via a 4,500-kilometre (2,800 miles) high-voltage direct current (HVDC) network.

For this transmission system to work, the PowerLink, being developed by Singaporean company Sun Cable, will also need to build the world's largest battery, which will be stationed near Darwin on the northern coast of Australia.

The idea is that the network will transport current from the array at Newcastle Waters roughly 750 kilometres north, where it will be stored at the Darwin battery.

Some of the current will enter the local Darwin grid, but the majority will be exported internationally via over 3,700 kilometres of undersea cables laid along the ocean bed, first through Indonesian waters, before eventually making it all the way to Singapore.

Once the electricity reaches its ultimate destination, it's expected to provide power for over 1 million Singaporeans – about 20 percent of the sovereign island's population – and ultimately there are plans to provide power to Indonesians also. 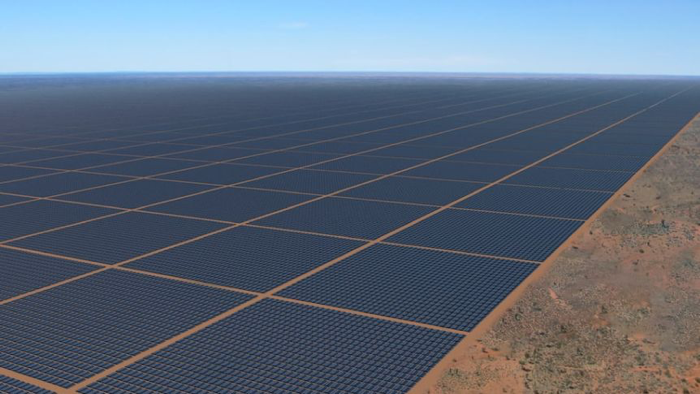 A rendering of the solar farm. (Sun Cable)

Of course, for this hugely ambitious multi-year renewables project to be pulled off, lots of things have to go right.

Once all the approvals are secured – including environmental assessments for a project expected to take up around 120 square kilometres (almost 50 square miles) of land – construction is expected to begin in 2023, with energy production commencing in 2026, and the first exported electricity could be flowing in 2027.

If all goes as planned, the Power Link could be a watershed moment not only for solar power but for the clean energy industry as a whole, illustrating how renewable energy can be shared and relayed across international networks, spanning vast distances and even oceans.

"It is extraordinary technology that is going to change the flow of energy between countries. It is going to have profound implications and the extent of those implications hasn't been widely identified," Sun Cable CEO David Griffin told The Guardian in 2019.

"If you have the transmission of electricity over very large distances between countries, then the flow of energy changes from liquid fuels – oil and LNG – to electrons. Ultimately, that's a vastly more efficient way to transport energy. The incumbents just won't be able to compete."