World's Richest 10% Is Responsible For Half Our Global Fossil Fuel Emissions, Report Finds

As world leaders from 195 nations gather in Paris to come up with solutions to the current climate crisis, a new report has outlined who's responsible for what percentage of the world's global carbon emissions.

And while the results are shocking, it's not exactly a newsflash that the world's richest are trashing the joint while the world's poorest are barely making an impact.

Published by British charity Oxfam, the report concludes that the richest 10 percent of the world's population is producing 49 percent of our total carbon emissions, while the poorest 50 percent is contributing just 10 percent.

The data also show that in the richest 1 percent, the average person is emitting 175 times more carbon that the average person in the bottom 10 percent. And the total emissions produced by China's poorest 600 million people add up to just one-third of the total emissions from the richest 10 percent in the US - a group that numbers just 30 million people, by comparison.

"Rich, high emitters should be held accountable for their emissions, no matter where they live," Oxfam climate policy head, Tim Gore, told the press. "But it's easy to forget that rapidly developing economies are also home to the majority of the world's very poorest people and while they have to do their fair share, it is rich countries that should still lead the way." 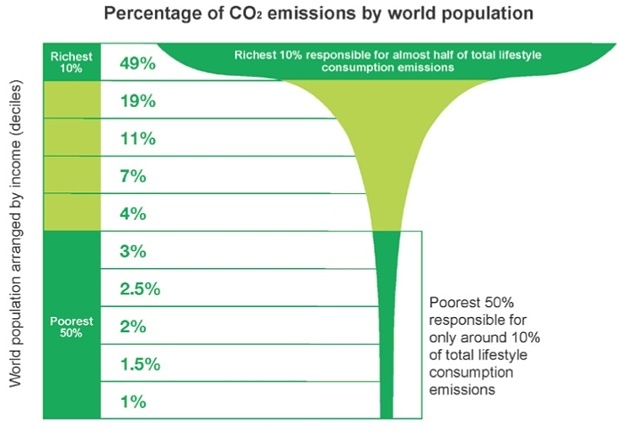 While the numbers are extremely telling, and do well to expel myths that highly populous developing countries are the world's biggest carbon emitter, some have criticised these kinds of comparisons as being pointless.

When it comes to human-caused climate change, pointing fingers to say who's accountable for what has been an understandably controversial issue, and the AFP mentions that the world's richest and poorest countries remain "deeply divided" on how to divvy up the responsibility for curbing carbon emissions.

"Developing countries say the West has polluted for much longer and should shoulder a bigger obligation for cutting back," the news agency reports. "They also demand assurances of finance to help them shift to less-polluting renewable energy, shore up defences against climate impacts such as sea level rise, droughts and superstorms, and to cover damage that cannot be avoided."

"It's not just a question of historical responsibility - they also have the most room to make the cuts and make the strongest impact," Indian prime minister, Narendra Modi, said of the world's richest nations at the UN climate change summit in Paris on Monday.

Regardless of who's more to blame about the situation we've found ourselves in as a global community, it's not yet clear how we're going to get ourselves out it. As Katie Nguyen at Reuters reports, recent pledges made by 184 countries to curb greenhouse gas emissions beyond 2020 "are too weak to limit the rise in global temperatures to 2 degrees Celsius (3.6 Fahrenheit) above pre-industrial times".

And that's a problem, because if we can't stop that 2-degree increase, we're ensuring a pretty catastrophic future for ourselves and our children.