The lives and deaths of animals that lived more than 2,000 years ago are coming to light. A cat, a snake, and a bird that were mummified in ancient Egypt have undergone non-invasive, high-resolution 3D X-ray scans, helping us to understand how they were kept, and the complex mummification procedures practised thousands of years ago.

The new work can also help us to understand the relationships ancient Egyptians had with animals, and the roles those animals played in their complex spiritual lives.

Actually, ancient Egyptians mummified a lot of animals. It was a whole industry. Millions of mummified animals have been found, everything from scarabs, to puppies, to ibises, to crocodiles.

Some animal mummies were, of course, beloved pets buried with their owners. And some were included in human burials as food for the afterlife. Some were sacred animals in their own right, worshipped in their lifetime and mummified after death.

But the vast majority of mummified animals were likely votive offerings - given to the gods to seek favour, or lend weight to a prayer. Some were captured wild, but evidence also suggests that many animals were bred and reared on 'mummy farms' for this express purpose, which then possibly sold their wares to those wishing for extra favour from the gods. 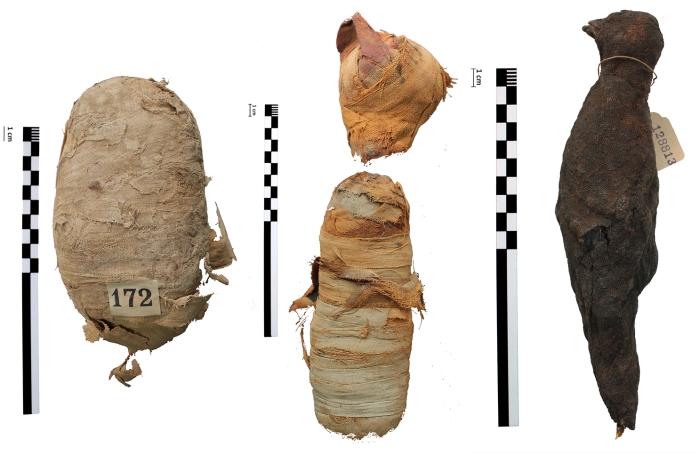 From left to right, the mummified snake, cat, and bird. (Swansea University)

Although these tiny mummies can reveal a lot about these ancient practices, studying them isn't easy, especially if you don't want to damage the specimen.

It wasn't always this way - in Victorian England, at the height of Egyptomania, surgeon Thomas Pettigrew delighted morbidly curious audiences with his mummy unrollings - unwrapping and performing autopsies on corpses thousands of years dead.

Now, the scientific community rightfully views such wanton destruction of archaeologically important and culturally invaluable objects as anathema, and we use X-ray imaging technology to peer inside instead.

This approach isn't perfect, either - conventional radiography is two-dimensional, which makes it more difficult to understand the three-dimensional shape of the mummified remains; medical CT scans, which are in three dimensions and solve this problem, are relatively low resolution.

But micro-CT scans, which generate images at resolutions much higher than medical CT scans, are now emerging as a tool for studying mummies. This is what a team of researchers used to look inside three mummies of different sizes and shapes from the Egypt Centre collection at Swansea University in the UK.

"Using micro CT we can effectively carry out a post-mortem on these animals, more than 2,000 years after they died in ancient Egypt," said materials scientist Richard Johnston of Swansea University.

"With a resolution up to 100 times higher than a medical CT scan, we were able to piece together new evidence of how they lived and died, revealing the conditions they were kept in, and possible causes of death."

The three animals were a cat, a bird, and a snake.

The cat, as scans revealed, was most likely a domesticated kitten (Felis catus) - less than five months old when it died, as evidenced by teeth in the jawbone that had not yet erupted. And it had a broken neck - something that is often found in the remains of cats thought to have been bred for mummification.

It's not clear if this fracture was the cause of death, or if the damage occurred post mortem as the kitten was being posed with its head upright.

Identifying the bird was a little trickier. As the team found by measuring its bones, it most closely resembles a Eurasian kestrel (Falco tinnunculus), and it's unclear how it died - it shows none of the signs of strangulation or a broken neck.

The snake's remains, by contrast, were very revealing. It was a juvenile Egyptian cobra (Naja haje), and its dislocated vertebrae suggest that it died after being caught by the tail and 'whipped' - supported by extensive damage to the skull.

Sadly, the snake also seems to have lived an uncomfortable life. Its kidneys were calcified, which is consistent with renal disease, and seen in modern snakes who are kept as pets in poor conditions with insufficient water. The post-mortem doesn't paint a particularly flattering picture of its caretakers, whoever they were.

In addition, its fangs were missing. Egyptian cobras are venomous, so it's possible that the fangs were removed from the dead snake to protect the embalmer.

All this reveals a rather grim picture of the ways ancient Egyptians treated the animals they offered up to the gods. But the research also demonstrates how micro-CT can reveal fine details that we otherwise might have missed.

"Our findings have uncovered new insights into animal mummification, religion and human-animal relationships in ancient Egypt."