The JunoCam onboard NASA's Juno spacecraft continues to provide we Earthbound humans with a steady stream of stunning images of Jupiter. We can't get enough of the gas giant's hypnotic, other-worldly beauty. This image of Io passing over Jupiter is the latest one to awaken our sense of wonder.

This image was processed by Kevin Gill, a NASA software engineer who has produced other stunning images of Jupiter.

The JunoCam on the Juno spacecraft was sent along on the ride to Jupiter just for this purpose. To take images of Jupiter and its moons and to make them available for people to render and work with. There's a massive gallery of that work here. This image is from data captured by Juno when it was about 8000 km above Jupiter's surface. Juno follows an extremely elliptical orbit around Jupiter, diving in close and risking extreme radiation exposure, then looping far away, to a distance of over 8 million km.

Io is a very large moon; it's roughly the same size as Earth's Moon. Yet it casts only a small shadow on enormous Jupiter, emphasizing that planet's immense size and its status as the Solar System's largest planet. Although we're calling it a shadow, it's really the same as a solar eclipse here on Earth. But due to the massive size difference between Earth and Jupiter, shadow seems like a more appropriate term. Jupiter has a powerful effect on everything close to it. The Juno spacecraft takes its highly-elliptical orbit to protect itself from Jupiter's extreme radiation belts. All of the spacecraft's electronics are housed inside a titanium vault to protect them.

Even so, its instruments will eventually succumb to the radiation, and the spacecraft will be sent to its destruction in Jupiter's atmosphere. 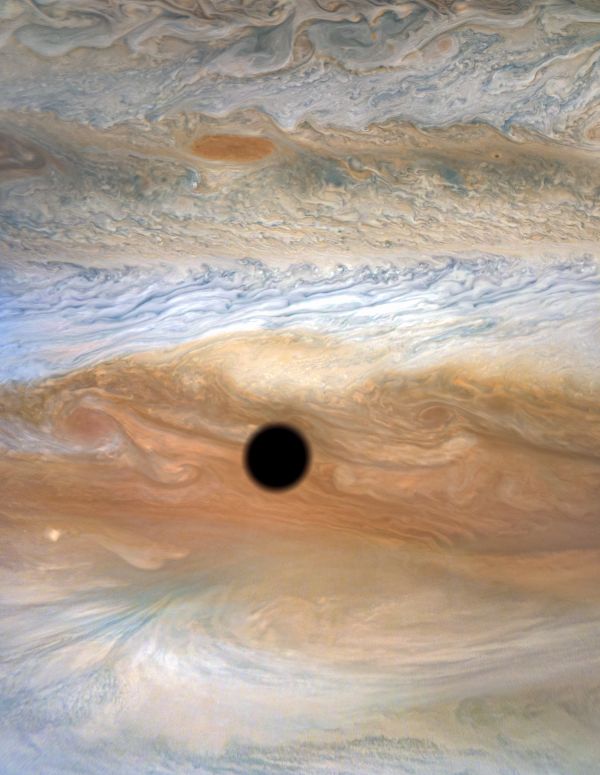