It's a panoramic, mind-blowing view of a molecular cloud complex littered with stardust, wisps of matter and general turmoil - a glimpse of a Milky Way region where new stars are being born.

The European Space Agency (ESA) has been celebrating the legacy of its wonderful Herschel Space Observatory, and we can't stop staring at one of the #HerschelMoments they recently shared.

The cloud complex consists of three regions named W3, W4, and W5, the initial W standing in for Dutch astronomer Gart Westerhout, who first noticed these clouds in the 1950s while surveying our galaxy with radio waves.

Decades later, ESA built the largest infrared telescope ever, named it after astronomers Caroline and William Herschel, launched it into space in 2009, and a stream of stunning images and discoveries came flooding in.

In 2010, the journal Astronomy & Astrophysics published a special feature with 152 papers already submitted with the initial science from the Herschel observatory. There were more to come, including the incredible starburst galaxy HFLS3 which spits out nearly 3,000 solar masses of stars every year.

But back to the magical molecular clouds picture.

The complex is located in the constellation Cassiopeia, and, according to the ESA, it's "one of the best regions in which to study the life and death of massive stars in our Milky Way galaxy."

That's because the far-infrared, high-definition wavelengths used by the Herschel observatory could actually catch the glow of the stardust scattered throughout these clouds, allowing astronomers to trace how stellar gas flows around newborn stars.

Below is W3, deemed to be one of the most active factories of massive stars in our entire galaxy, home to a glob of stellar mass many hundred thousand times the mass of our Sun: And here's W4, a bubble surrounding a star-forming region in the centre, with matter pushed to the sides by winds from supernova explosions: Last but not least, here's a closer look at W5, which hosts not one, but two such bubbles, with molecular matter churned up by even more massive star explosions: 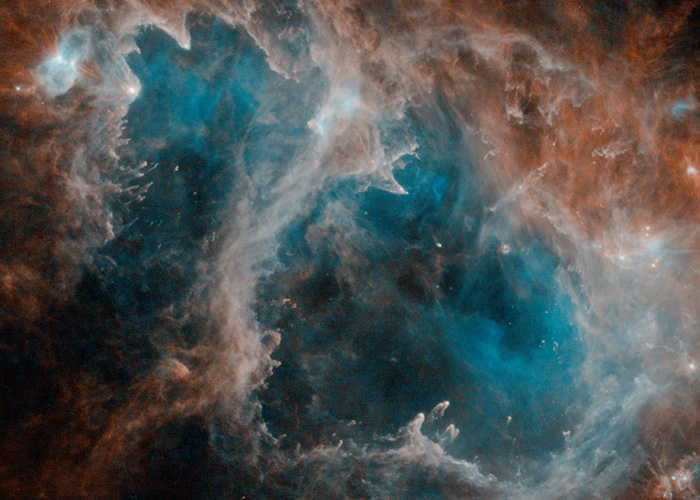 "Many seeds of new stars in this complex, especially in W3 and W5, have been observed along pillars, edges and other features that are being sculpted in the cloud material by the mighty effects of nearby massive stars," ESA explains in the caption.

Here's the entire panoramic view in full. For all your stargazing and wallpaper needs, you can head over to the ESA website to get the high-res deal.