A meta-analysis of studies spanning almost 70 years and over 3 million test scores has found a significant link between the cognitive ability of college students and the majors they completed.

Conducted by psychologist Jonathan Wai from Duke University, the analysis used five different measures of academic aptitude across the past seven decades to find that STEM majors have been consistently out-scoring all other fields since 1946.

But before you get upset about where your major sits in the ranking below (or start gloating obnoxiously to your friends in Agriculture), know this: the analysis is based on group averages across specific majors, and not the academic aptitude of individual students.

There are remarkable students studying in all academic fields, and there are many factors at play in how students perform, or what majors they end up completing, as Wai explains in his analysis over at Quartz:

"[I]nterests, which are not directly assessed here, likely play an important role in which major someone selects. One could argue that any one specific test and sample may not be an accurate reflection of the aptitude of specific majors, and this would be a valid point.

However, this analysis uses five independent measures and samples of academic aptitude at different points in time - which include everything from tests of cognitive abilities to tests of academic achievement - showing these findings replicate and are quite robust."

With that said, on to the findings. First up, Wai looked at a study published in Science back in 1952, which ranked the academic aptitudes of US college seniors and recent graduates by discipline.

The first data sample encompassed 10,000 graduates from 40 universities in 1946, and their academic aptitudes were based on scores from the Army General Classification Test (AGCT) - a standardised test used by the US military to assess students' general learning ability. You can see how the rankings turned out below: 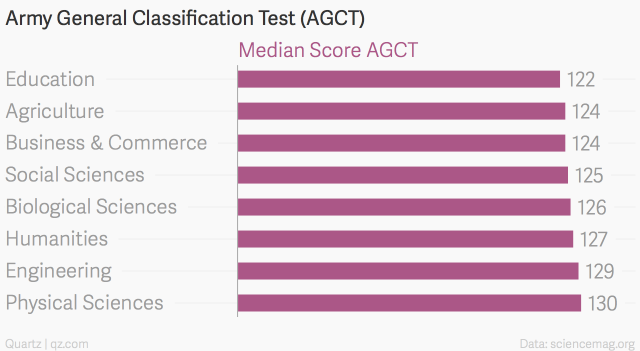 The study, conducted by researchers from the US Commission on Human Resources and Advanced Training, then looked at a second data set encompassing 38,420 college seniors and the scores they received in the 1951 Selective Service College Qualification Test (SSCQT), which posed 150 questions testing their maths and verbal skills. You can see those rankings below: 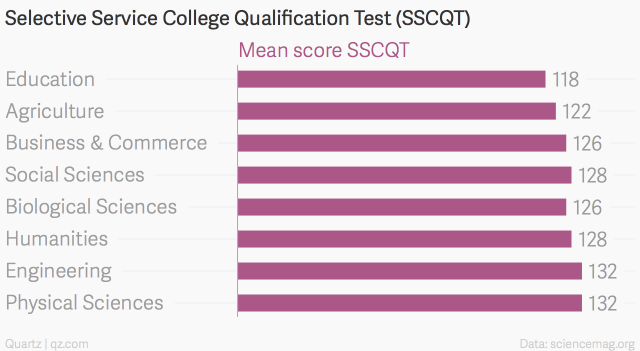 Remarkably, across both tests and tens of thousands of students, the rankings came out almost identical.

Over at Quartz, Wai then cites research he and a couple of colleagues published in the Journal of Educational Psychology back in 2009, which used data from Project Talent - a stratified random sample of around 400,000 American high school students and the scores they got in maths, verbal, and spatial aptitude tests in the early 1970s.

Eleven years out of high school, the students' educational, occupational, and general life outcomes were assessed. "The following chart shows general average academic aptitude by major, along with the pattern of average math, verbal, and spatial aptitude within each major as well as between students who earned bachelor’s, master’s, and PhD degrees," says Wai. 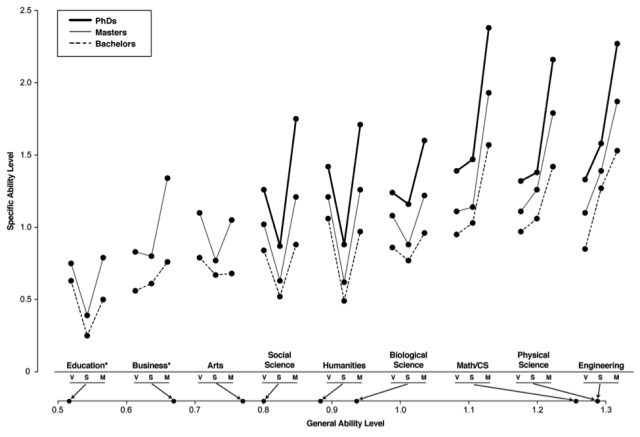 The fourth measure Wai used was from a data set of over 1.2 million students who took the US Graduate Record Examination (GRE) between 2002 and 2005, and who knew which major they intended to study in college. Those results are as follows: 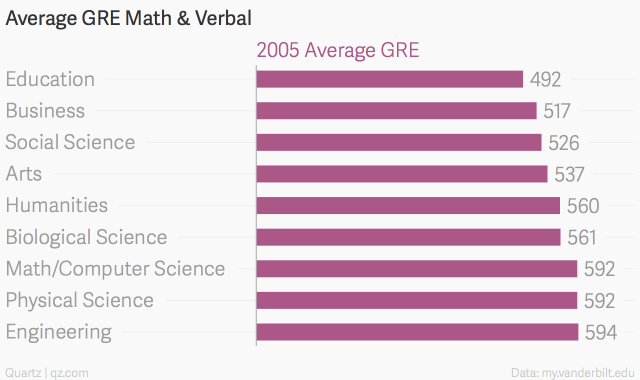 And finally, Wai looked at Scholastic Assessment Test (SAT) scores from about 1.6 million US students in 2014, and the graph below shows how their average math and verbal aptitude linked up with the area they intended to study at college. 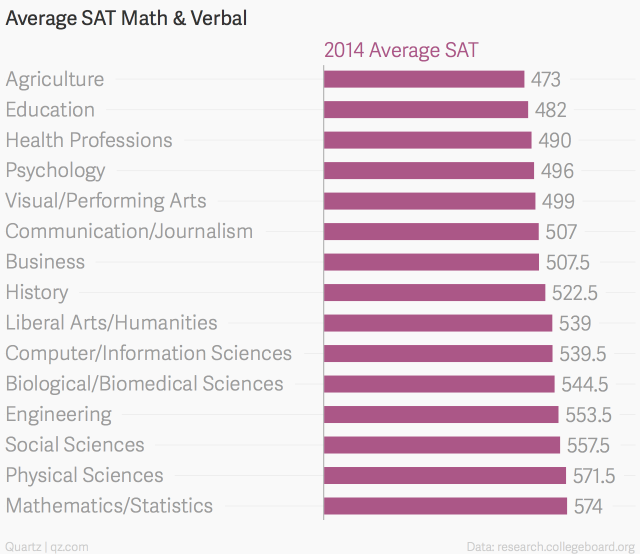 For a really awesome breakdown of what all of the above could actually mean, head over to Wai’s article at Quartz, where he talks about why he thinks STEM majors have been consistently at the top of the rankings for academic aptitude over the past seven decades, while education majors have consistently been at the bottom.

To put it quite simply, Wai says mathematics and physical science are hard, and tend to require academic brilliance even at the lowest levels. "That STEM majors have consistently had the highest average academic aptitude may ... reflect the fact that STEM disciplines are highly complex and require such aptitude," he says.

When it comes to education, things appear to be a whole lot more complicated, with the scores potentially being more of a reflection of how the US treats its educators rather than the intelligence levels of students who choose to study teaching. While STEM subjects tend to be most highly compensated in the workforce - and so are more likely to pull in the best students - teachers have lower starting salaries than many other professions, and according to the US National Education Association, the more years you put into teaching, the wider that gap gets.

Consider that the world's top performing school systems, such as those in Singapore, Finland, and South Korea, only recruit new teachers from the top third of the academic cohort, not the bottom, says Wai. He adds that what a country's top students choose to study says a lot about a society, so hopefully it won't take another 70 years for the US to figure out that it needs to properly compensate its educators.